Mariupol’s dead put at 5,000 as Ukraine braces in the east 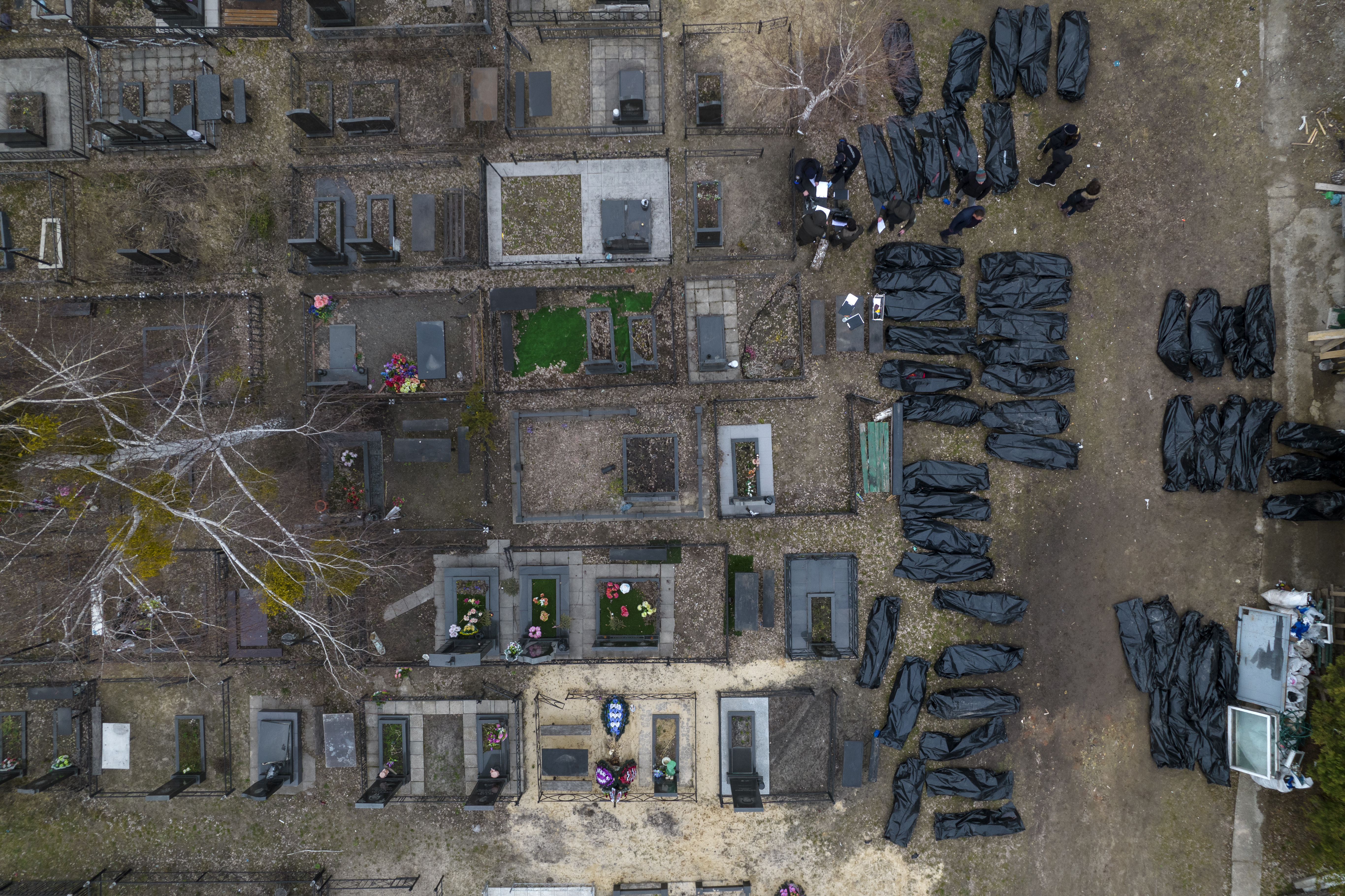 Policemen work to identify civilians who were killed during the Russian occupation in Bucha, Ukraine, on the outskirts of Kyiv, before sending the bodies to the morgue, Wednesday, April 6, 2022. (AP Photo/Rodrigo Abd)

ANDRIIVKA, Ukraine (AP) — The mayor of the besieged port city of Mariupol put the number of civilians killed there at more than 5,000 Wednesday, as Ukraine collected evidence of Russian atrocities on the ruined outskirts of Kyiv and braced for what could become a climactic battle for control of the country’s industrial east.

Ukrainian authorities continued gathering up the dead in shattered towns outside the capital amid telltale signs Moscow’s troops killed civilians indiscriminately before retreating over the past several days.

In other developments, the U.S. and its Western allies moved to impose new sanctions against the Kremlin over what they branded war crimes.

And Russia completed the pullout of all of its estimated 24,000 or more troops from the Kyiv and Chernihiv areas in the north, sending them into Belarus or Russia to resupply and reorganize, probably to return to the fight in the east, a U.S. defense official speaking on condition of anonymity said.

In his nightly address, Ukrainian President Volodymyr Zelenskyy warned that the Russian military continues to build up its forces in preparation for the new offensive in the east, where the Kremlin has said its goal is to “liberate” the Donbas, Ukraine’s mostly Russian-speaking industrial heartland. He said Ukraine, too, was preparing for battle.

“We will fight and we will not retreat,” he said. “We will seek all possible options to defend ourselves until Russia begins to seriously seek peace. This is our land. This is our future. And we won’t give them up.”

Ukrainian authorities urged people living in the Donbas to evacuate now, ahead of an impending Russian offensive, while there is still time.

“Later, people will come under fire,” Deputy Prime Minister Iryna Vereshchuk said, “and we won’t be able to do anything to help them.”

A Western official, speaking on condition of anonymity to discuss intelligence estimates, said it will take Russia’s battle-damaged forces as much as a month to regroup for a major push on eastern Ukraine.

Mariupol Mayor Vadym Boichenko said that of the more than 5,000 civilians killed during weeks of Russian bombardment and street fighting, 210 were children. He said Russian forces bombed hospitals, including one where 50 people burned to death.

Boichenko said more than 90% of the city’s infrastructure has been destroyed. The attacks on the strategic southern city on the Sea of Azov have cut off food, water, fuel and medicine and pulverized homes and businesses.

British defense officials said 160,000 people remained trapped in the city, which had a prewar population of 430,000. A humanitarian relief convoy accompanied by the Red Cross has been trying for days without success to get into the city.

Capturing Mariupol would allow Russia to secure a continuous land corridor to the Crimean Peninsula, which Moscow seized from Ukraine in 2014.

In the north, Ukrainian authorities said the bodies of least 410 civilians have been found in towns around Kyiv, victims of what Zelenskyy has portrayed as a Russian campaign of murder, rape, dismemberment and torture. Some victims had apparently been shot at close range. Some were found with their hands bound.

At a cemetery in the town of Bucha, northeast of Kyiv, workers began to load more than 60 bodies apparently collected over the past few days into a grocery shipping truck for transport to a facility for further investigation.

Zelenskyy accused Russia of interfering with an international investigation into possible war crimes by removing corpses and trying to hide other evidence in Bucha.

“We have information that the Russian troops have changed tactics and are trying to remove the dead people, the dead Ukrainians, from the streets and cellars of territory they occupied,” he said in his address. “This is only an attempt to hide the evidence and nothing more.”

Switching from Ukrainian into Russian, Zelenskyy urged ordinary Russians “to somehow confront the Russian repressive machine” instead of being “equated with the Nazis for the rest of your life.”

He called on Russians to demand an end to the war, “if you have even a little shame about what the Russian military is doing in Ukraine.”

More bodies were yet to be collected in Bucha. The Associated Press saw two in a house in a silent neighborhood. From time to time there was the muffled boom of workers clearing the town of mines and other unexploded ordnance.

Police said they found at least 20 bodies in the Makariv area west of Kyiv. In the village of Andriivka, residents said the Russians arrived in early March and took locals’ phones. Some people were detained, then released. Others met unknown fates. Some described sheltering for weeks in cellars normally used for storing vegetables for winter.

The soldiers were gone, and Russian armored personnel carriers, a tank and other vehicles sat destroyed on both ends of the road running through the village. Several buildings were reduced to mounds of bricks and corrugated metal. Residents struggled without heat, electricity or cooking gas.

“First we were scared, now we are hysterical,” said Valentyna Klymenko, 64. She said she, her husband and two neighbors weathered the siege by sleeping on stacks of potatoes covered with a mattress and blankets. “We didn’t cry at first. Now we are crying.”

To the north of the village, in the town of Borodyanka, rescue workers combed through the rubble of apartment blocks, looking for bodies. Mine-disposal units worked nearby.

The Kremlin has insisted its troops have committed no war crimes, charging that the images out of Bucha were staged by the Ukrainians.

Thwarted in their efforts to swiftly take the capital, increasing numbers of President Vladimir Putin’s troops, along with mercenaries, have been reported moving into the Donbas.

At least five people were killed by Russian shelling Wednesday in the Donbas’ Donetsk region, according to Gov. Pavlo Kyrylenko, who urged civilians to leave for safer areas.

In the Luhansk region of the Donbas, Russian bombardment set fire to at least 10 multi-story buildings and a mall in the town of Sievierodonetsk, the regional governor reported. There was no immediate word on deaths or injuries.

Russian forces also attacked a fuel depot and a factory in the Dnipropetrovsk region, just west of the Donbas, authorities said.

Ukrainian forces have been fighting Russia-backed separatists in the Donbas since 2014. Ahead of its Feb. 24 invasion, Moscow recognized the Luhansk and Donetsk regions as independent states.

In reaction to the alleged atrocities outside Kyiv, the U.S. announced sanctions against Putin’s two adult daughters and said it is toughening penalties against Russian banks. Britain banned investment in Russia and pledged to end its dependence on Russian coal and oil by the end of the year.

The European Union is also expected to take additional punitive measures, including an embargo on coal.

Meanwhile, the United States and the United Kingdom boycotted an informal meeting of the Security Council called by Russia to press its baseless claims that the U.S. has biological warfare laboratories in Ukraine.

The meeting was the latest of several moves by Russia that have led Western countries to accuse Moscow of using the U.N. as a platform for disinformation to divert attention from the war.

Russia’s deputy U.N. ambassador Dmitry Polyansky, who presided over the meeting, asserted that Ukraine, supported by the U.S., was implementing what he claimed were dangerous projects and experiments as part of a military biological program.

The allegations have previously been debunked. Ukraine does own and operate a network of biological labs that have received funding and research support from the U.S. and are not a secret. The labs are part of a program that aims to reduce the likelihood of deadly outbreaks, whether natural or man-made.

The U.S. efforts date back to work in the 1990s to dismantle the former Soviet Union’s program for weapons of mass destruction. 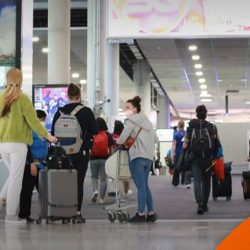 Substantial increase in overseas arrivals in Thailand since April 1

Putin's daughters, sanctioned by US, hidden from public eye