A couple of Laotian nationals were arrested on fraud charges this morning (Friday), at a hotel in Pathum Thani province, by Thai police from the Combating Transnational Criminals and Illegal Immigrants Centre (CTIC).

Police said that the couple, Anusith Putthawong and Pornthip Chaipanya, reputed to be a “net idol” in the Lao PRD, are wanted by the authorities there for allegedly cheating about 20 billion Kip (~400 million baht) from their customers, who invested in their online informal credit operations, locally known as “share” systems, which have recently collapsed.

The two suspects told Thai police, however, that the customers’ investments were much less than 400 million baht, as claimed, and that the amount had been embezzled by two administrators of the online informal credit operations.

Anusith claimed that the couple only have about 50,000 baht in their possession and they did not “flee” from the Laos PRD, but merely wanted to take a break in Thailand to figure out what to do. 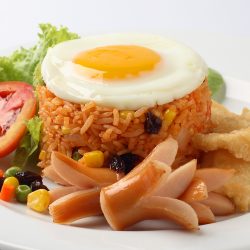 Fried rice gets a superstar boost