About 60 families in Ban Huay Kharb, Nan’s Bo Klua district which was hit by a landslide over the weekend have agreed to be resettled to a new location after they were told that their present settlement is unsafe and at risk of being struck by another deadly landslide.

Eight members of a family in the village were killed when landslide induced by heavy rains crushed their house as they were sleeping last Saturday morning.

Village head Thanawat Chamrat said the villagers were awaiting answer from the authorities concerned about the location where they would be resettled although they were assured that it would not be far away from their present village and they could still come back to the village to make a living.

Third Army Region commander Lt-Gen Wichak Siriban said Monday that authorities concerned with the representatives of the villagers of Ban Huay Kharb about a new site for their resettlement.

As for compensation for villagers whose houses were destroyed or partially damaged by the landslide last Saturday, the Fund to Assist Victims of Public Disasters has a set guideline about compensation payments as follows:  230,000 baht for complete damage of a house; 70,000 baht for partial damage; and 15,000 baht for minor damage.  50,000 baht for each dead victim.

Interior Minister Anupong Paochinda today visited the centre for the evacuees from Ban Huay Kharb at Ban Sawa school in Tambon Dong Phaya, Bo Klua district, before proceeding to the site of the landslide in Ban Huay Kharb.

He instructed officials concerned to keep people living on foothills at risk of landslides to be abreast with weather conditions and rains as a safety precaution. 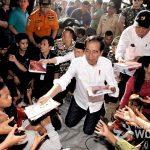 Over 500 people stranded on mountain on Lombok waiting for rescue