Forensic technicians carry a bodybag at the site of a mass grave in a forest on the outskirts of Izyum, eastern Ukraine on 18 September, 2022 / AFP

The Kremlin on Monday denied its forces were responsible for large-scale killings in east Ukraine and accused Kyiv of fabricating its discoveries of mass graves in recaptured territory.

Ukraine recaptured Izyum and other towns in the east this month, crippling Kremlin supply routes and bringing fresh claims of Russian atrocities with the discovery of hundreds of graves — some containing multiple bodies.

“These are lies,” Kremlin spokesman Dmitry Peskov told reporters on Monday. Moscow, he said, “will stand up for the truth in this story”.

Fighting in the northeast has raged and AFP journalists heard artillery exchanges in frontline Kupiansk on Monday, as traumatised civilians headed out of the town now mainly in Ukrainian hands.

The streets were strewn with broken glass, spent cartridge casings and the discarded remains of ration packs issued by both forces.

Most of the fire was outgoing, with Ukrainian tanks and artillery targeting Russian positions on the west side of the town, over a mess of broken bridges. A column of smoke rose in the distance.

At the entrance to the town, cowering from the sounds of Ukrainian tank shells passing overhead towards Russian lines, civilians gathered to hitch rides or join buses to head out into safer Ukrainian territory.

“It was impossible to stay where we were living,” said 56-year-old Lyudmyla, who braved the constant crack of shells to cross the Oskil river from the disputed east bank to the relative safety of the west.

“There was incoming fire not just every day, but literally every hour. It’s very tough there, on the other bank of the river.”

In his address to the nation on Monday, Ukrainian President Volodymyr Zelensky said the Russians were “panicking” as his forces held recaptured territory in the northeastern Kharkiv region.

Russian-backed authorities in east Ukraine said a “punitive” strike by Kyiv’s forces had killed more than a dozen people and wounded more in the separatist stronghold of Donetsk.

The rebel head of the region claimed the strike was “deliberate” and said it would “not go unpunished”.

A court in the neighbouring rebel-held region of Lugansk meanwhile sentenced two employees of the Organization for Security and Cooperation in Europe to 13 years on treason charges.

OSCE chairman Zbigniew Rau condemned the “unjustifiable” detention of the mission’s members since the outbreak of the war, calling it “nothing but pure political theatre… inhumane and repugnant”.

Ukrainian civilians in the Kharkiv region have recounted months of brutality under Russian occupation.

In Kupiansk, Mykhailo Chindey told AFP he had been tortured on suspicion of supplying targeting coordinates to Ukrainian forces.

“One person was holding my hand and another one was beating my arm with a metal stick. They were beating me up two hours almost every day,” he told AFP.

“I lost consciousness at some point. I lost a lot of blood. They hit my heels, back, legs and kidneys.”

The strike damaged more than 100 windows at the station, but the reactors were not damaged, Energoatom said, publishing photos of glass shattered around blown-out frames.

It also released images of what it said was a two-metre-deep crater from where the missile landed. No staff were wounded, it said.

Attacks around Ukrainian nuclear facilities have spurred calls from Kyiv and its Western allies to de-militarise surrounding areas.

Europe’s largest atomic facility — the Zaporizhzhia nuclear plant in Russian-held territory in Ukraine — has become a hot spot for concerns after tit-for-tat claims of attacks.

The Mykolaiv region in southern Ukraine, where the Pivdennoukrainsk plant is located, is close to the front line of a Ukrainian counter-offensive.

Russian forces have continued to shell Ukrainian-held towns near the front lines.

The UN’s atomic agency deployed a monitoring team to the site in early September after new fighting.

“Russia endangers the whole world. We have to stop it before it’s too late,” Zelensky said early Monday.

Ukraine will be “very high on the agenda” when world leaders formally begin meeting in New York on Tuesday for the United Nations General Assembly, said the European Union’s foreign policy chief.

“There are many other problems, we know, but the war in Ukraine has been sending shockwaves around the world,” Josep Borrell said after meeting EU foreign ministers on the eve of the UN gathering, which Zelensky is to address by video. 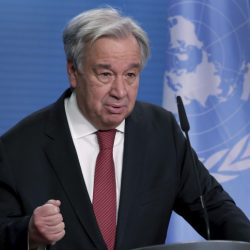