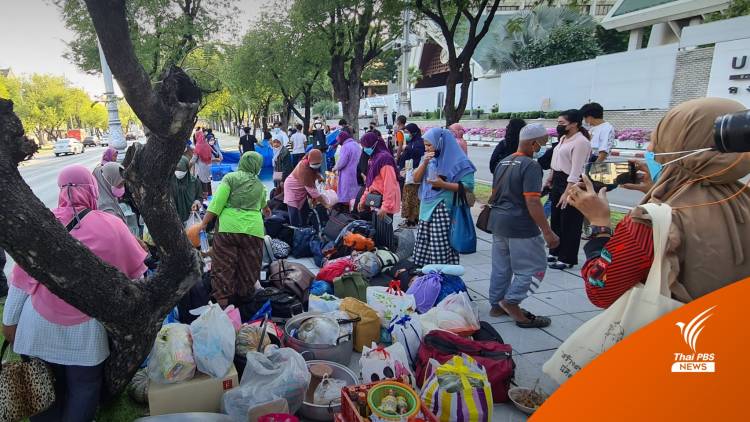 Defiant protesters from Jana district, of Thailand’s southern province of Songkhla, have vowed to return to Government House next Monday to demand that the government fulfils its commitments over the controversial Jana industrial estate project, as defined in a memorandum of understanding (MoU).

Prime Minister Prayut Chan-o-cha has, however, rejected the MoU, claiming that it has not been endorsed by the cabinet, while claiming that he is open to hearing the protesters’ views and concerns.

The protesters, including 37 arrested by riot police at their temporary camp at Government House on Monday night and who were later released, are now camping out in front of the United Nations building, which is only a short distance from Government House.

The group briefly rallied in front of Government House on Wednesday to read a statement outlining their demands, which include:

– The government must suspend all construction and pre-construction activities in the project area until the first two demands are met.

– The government must withdraw all charges against the 37 protesters arrested by police on Monday.

The group is also planning a gathering at the Interior Ministry this afternoon (Thursday).

The Jana industrial estate project was approved by the government in 2019, to be overseen by the SBPAC. It is located on about 2,680 hectares of land. Most of the land has already been purchased from local people by two companies, TPIPP and IRPC, which aim to implement the project, working with PTT Public Company, Thailand’s largest oil trading and exploration company.

The finished project will accommodate agro and light industries; heavy industries; four power plants with a combined capacity of 3,700 megawatts; two deep-sea ports, one for containers and the other for offloading of natural gas; a logistics zone for the distribution of products, and residential housing and other services.

When complete, it will be the largest industrial estate in southern Thailand, generating as many as 100,000 jobs.

One contentious issue, raised by the protesters, is how the city planning committee of Songkhla was able to convert, without the consent of the local people, over 1,000 hectares of farm land into an industrial zone, to pave the way for the project.

Most of the population in Jana district are Malay Muslims and the district is considered as a hot bed of insurgency, along with Yala, Pattani and Narathiwat provinces.