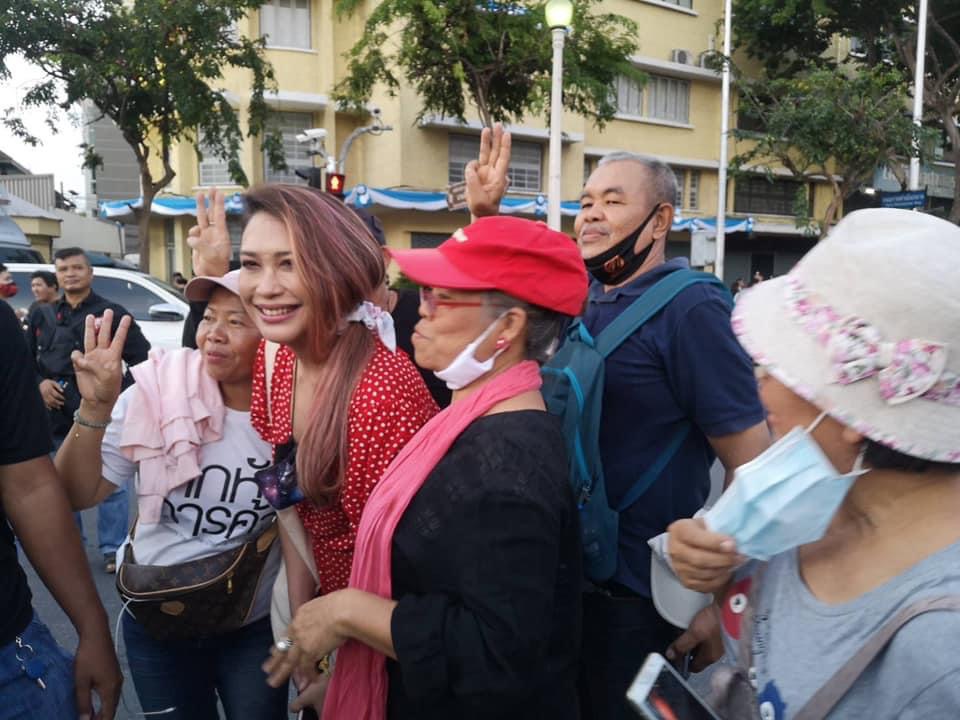 Amid escalating anti-government protests, famous figures are enjoying fresh popularity for their kind acts towards youngsters taking to the streets.

Neither actress-singer Inthira “Sine” Charoenpura, whose song “Sailom Tee Wangdee” (Well-Wishing Wind) is an all-time favourite, nor former government spokesman Dr Tosaporn Sererak have been officially on stage when protesters have called for the resignation of Prime Minister Prayut Chan-o-cha, a new charter and monarchy reform. Yet their small but heartfelt contributions have warmed the hearts of protesters. 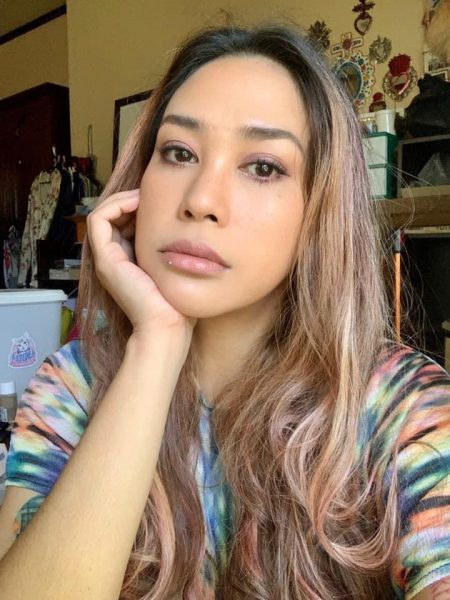 Inthira has been dubbed the “nation’s fairy godmother” for delivering food and ice cream to demonstrators. Her moves have made headlines and handed her a new generation of fans. 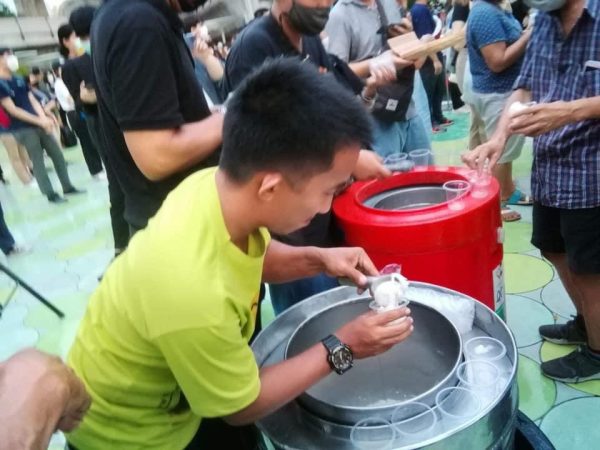 Tosaporn, meanwhile, has public attention for giving first aid to protest leader Panupong Jardnok, alias Mike Rayong, when he lost consciousness in a melee while being re-arrested on October 30. A week later, Tosaporn’s following on Twitter had jumped by more than 30,000.

Although both Inthira and Tosaporn were already well-known, their involvement with today’s young protesters has undoubtedly given a significant boost to their fame.

Vocalist with a political voice

At the age of 40, Inthira is a generation older than students gathering at political rallies. Yet, she feels a strong connection with them. “I know what it feels like to speak up but be dismissed as a fault-finding trouble-seeker,” she said recently. “I don’t want to see them feel the same pain. I don’t want them to feel alienated”.

Born to actor Ruj Ronnapop (Surin Charoenpura), Inthira stepped into showbiz at the age of just 13, taking up a very challenging role in a TV series. She won rave reviews and quickly established herself as a star.

At 15, Inthira launched her first single album with one of the biggest music houses in Thailand. By 1999, the younger sibling had built a very successful career in the entertainment industry. Not only was her third album a big success, but she had become the female star of the first Thai film to have grossed over Bt100 million – “Nang Nak”. Inthira, an avid reader, also started writing a column in her early 20s.

Outspoken and vocal, her name began to be associated with not just entertainment but also politics. In 2011, she was among those who signed a petition to press for changes to the lese-majeste law. She also worked as a TV host for Voice TV, seen by some as a red-shirt mouthpiece for the Shinawatra clan.

Inthira’s political comments have earned praise from liberals and bitter criticism from conservatives. Her haters even gloated online when she suffered a serious car accident in 2011, which triggered post-traumatic stress disorder. Although she overcame it with the help of psychiatrists, she was soon hit by the challenge of taking care of her mother who was ailing with a degenerative brain disease. The challenge threw Inthira into a major depressive disorder, which forced her to admit her mother to Srithanya Hospital. Inthira is open about suffering from severe depression, but has never stopped speaking her mind, regardless of the consequences.

“There is a price to pay, of course. Some [conservative] seniors don’t want me to speak up. Some people have used very harsh words in criticising me. There were days when I dared not read comments on social media,” Inthira recalled.

But the tide has now changed. Large numbers of people are now leaping to her defence and offering their support in various ways. Some are praising her on social media, while others are flocking to her family’s café, Coffee Tree.

They appreciate the fact that Inthira not only sends food to rally sites, she also visits protest leaders in hospitals, bringing along tasty treats to keep up morale. For example, she gifted prominent student leader Panusaya “Rung” Sithijirawattanakul with a plate of her favourite dish – grilled prawns. 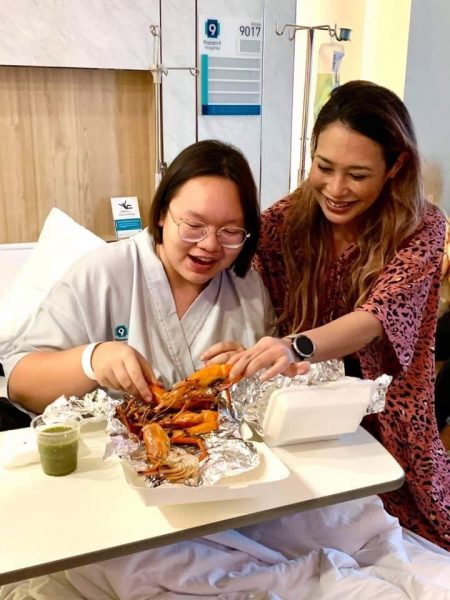 “I started handing out food to show my support for Thanet Anantawong [a demonstrator jailed for protesting the 2014 coup] who was released from prison earlier this year [without conviction]. Knowing that he used to be an ice-cream vendor, I bought an ice-cream tub from him to hand to the young protesters,” Inthira said. “After starting with that single ice-cream tub, I have now been ordering a variety of foods and snacks.”

Undeterred by opposition – including a former MP candidate who filed a police complaint against her for providing protesters with food, and a firm that cancelled one of her jobs – Inthira has no plans to back down.

Thailand’s political conflict has been called an ideological clash between different generations, which makes Tosaporn’s presence at youth-led rallies all the more surprising.

Born in 1955, his age and conservative appearance make him easy to spot among the crowd of student protesters. Yet he insists on standing with them, offering hugs, impromptu musical performances, and medical help when necessary.

“I intend to fight alongside the students. If we want a better society and a better government, we must come together in this battle,” Tosaporn said. 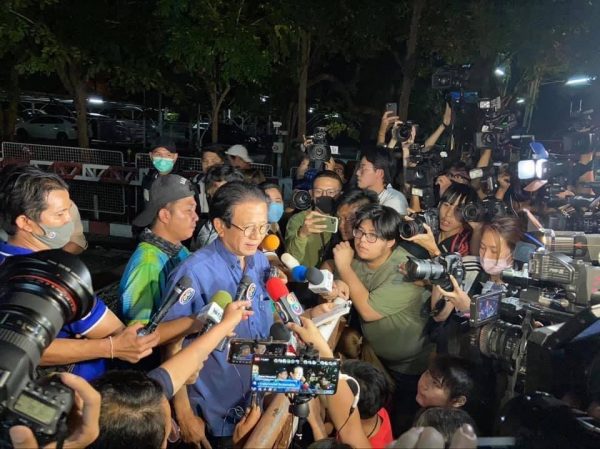 As a young man, he joined the 1973 uprising against dictatorship. Today, he is back rallying with students again.

His presence surprised some political observers, given that Tosaporn – several times elected as an MP – declined to join the red-shirt rallies in 2010 despite belonging to the Thai Rak Thai (TRT) Party and its reincarnation, Pheu Thai.

Born in Trang province, Tosaporn studied medicine and ophthalmology at Mahidol University. Initially he worked for the Public Health Ministry, but after marrying into a political family he left the civil service to pursue a career in politics.

His wife, Panruetai, is daughter to the late Phrae MP Metha Auapinyakul and a former MP herself. Her younger brother, Woravat Auapinyakul, is a former education minister.

Tosaporn was elected to Parliament for the first time in 1996 as an MP for Phrae under the Chart Thai Party banner. He was re-elected in 2001 and 2005 as an MP for the now-dissolved TRT. In 2007, his position as a TRT executive saw him banned from politics for five years.

In 2012, he was appointed government spokesman by the Yingluck Shinawatra administration, and a few months later, was promoted to deputy secretary-general for the PM.

Despite his Pheu Thai Party ties, Tosaporn decided to join the Thai Raksa Chart Party for last year’s election in the hope of boosting its number of party-list MPs. However, his hopes of winning a seat in Parliament were dashed when Thai Raksa Chart was dissolved ahead of the election.

Without the distraction of parliamentary duties, Tosaporn has found time to attend several street rallies in recent months, also rushing to the aid of protest leaders when they are arrested.

He has even whipped out his harmonica for the rendition of inspiring songs and even sang “Happy Birthday” to boost demonstrators’ morale, while also offering his medical expertise when needed. 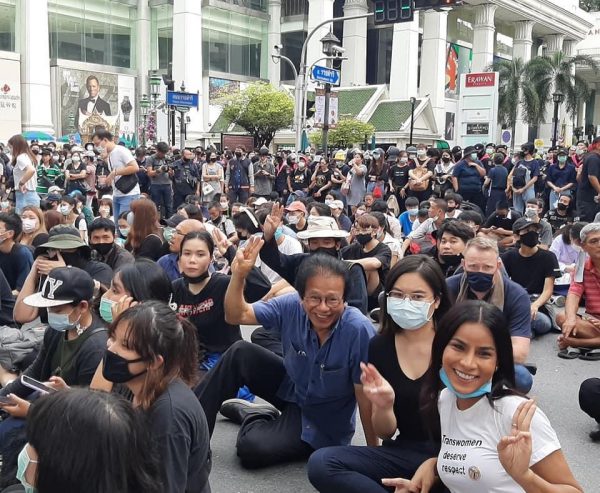 Clips and photos circulating on social media show Tosaporn beaming as he hugs young protesters. His own posts about the rallies usually end with, “Love” or “We are friends”.

His warm personality has charmed the hearts of young demonstrators, many of whom now rush up to him with open arms for hugs and selfies.

If Inthira has taken the role of “godmother” to the protesters, then Tosaporn could be dubbed their cherished grandfather. 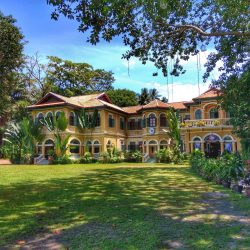 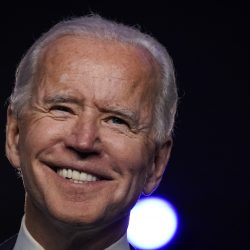