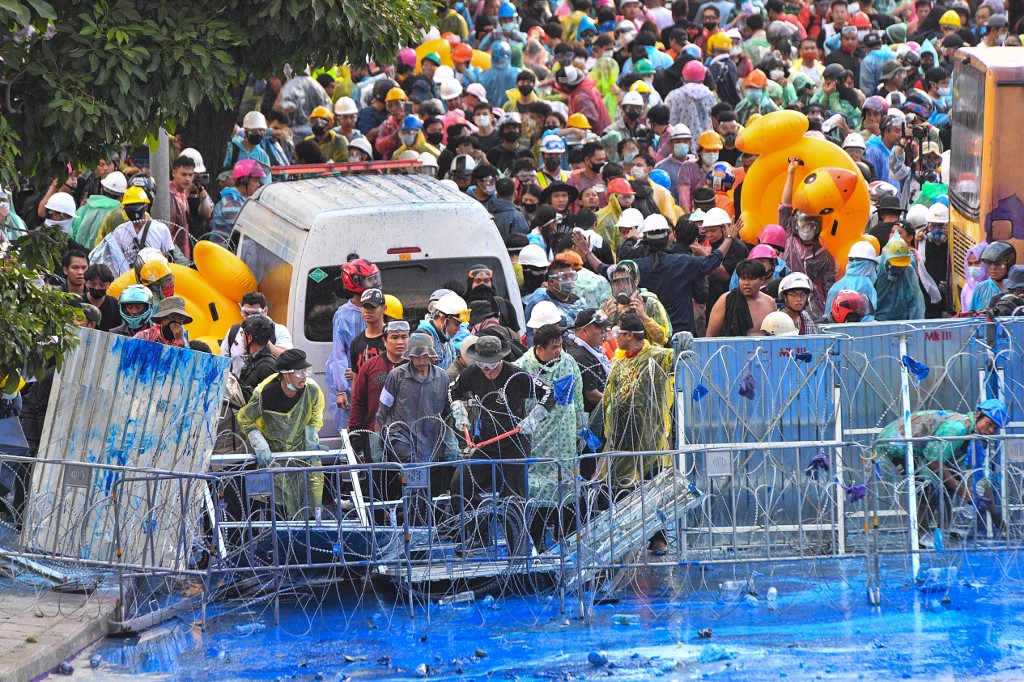 Anti-establishment protesters gather at a barrier in front of police during an anti-government rally in Bangkok on November 17, 2020. (Photo by Mladen ANTONOV / AFP)

Inspired by the ongoing anti-coup protests in Myanmar, and enraged by the indictment and detention of four protest leaders on lèse majesté charges, Thailand’s anti-establishment protests resumed after a pause since mid-December.

One may argue that the momentum has been lost, as the size of the protests has not picked up as expected by the protest leaders, compared to the peak in October, but their leaders remain hopeful.

“I believe the numbers will definitely pick up and the crowds may be even bigger than last year’s,” Benja Apan, one of the leaders of the United Front of Thammasat and Demonstration protest group, told Thai PBS World.

“There are various factors at play. Triggers, such as violent clashes or charges, can instill both fear among some and a determination to protest among others. Our movement does not depend on us, but on these political factors and triggers,” she said.

Tattep “Ford” Ruangprapaikitseree, the Free Youth co-founder and leader said that, whether or not the momentum can be revived will “depend on the people.”

The Free Youth group, now rebranded as REDEM, short for Restart Democracy, is asking people to vote for when next protests should take place.

“In this way, our fight for greater democracy will also be democratic,” said Jutatip “Ua” Sirikhan, also of the Free Youth group.

The Thammasat group hopes the movement, which is a hybrid of organized and organic actions, will become more organic once a consensus is achieved among the people. “This will take a while,” said Benja.

It is, nevertheless, undeniable that the movement is weakening, according to observers. Apart from the multiple charges many protesters are facing, mostly for violations of the Emergency Decree’s assembly ban, and sedition known as Article 116, the movement has also become fragmented, following Free Youth’s split from the umbrella Ratsadon (People) group late last year, with no reunification in sight.

“We’re not working together, but we will continue to support each other whenever we work on the same issues,” said Jutatip.

Increased violence and no accountability

Despite fewer protesters and a weakened movement, violence is on the increase. Gunshots were fired last year, with more incidents of small explosives being thrown this year. Some were less violent and resorted to throwing hard objects at police officers. With the movement increasingly fragmented and leaderless, it is not immediately clear who is responsible.

“We don’t know who they are either, but we have always reminded protesters of our peaceful policy on our social media. We can ask our guards and people to be more vigilant, but we can only do so much,” said Benja.

While some, like Dr. Wanwichit, see an increased tendency for violence as undermining the movement’s legitimacy, others see it as a tactic to regain support.

“The protesters can use police use of force to feed into their narrative, that what they’ve been saying is true. There have been provocations to achieve this,” said Prof. Dr. Chaiyan Chaiyaporn, a political science professor at Chulalongkorn University.

How long will it last?

“I believe the movement will continue, despite the reduced numbers. As long as there are people believing in this cause, the situation will remain like this,” Dr. Chaiyan added, referring to what he calls “the new normal” in politics, due to unprecedented criticism of the monarchy.

The academic views the right course of action for the authorities is to continue their use of the judicial process, so that “disputes can be settled and proven in court.”

For Dr. Wanwichit, this new round of protests may last 3-4 months, until protesters shift from street demonstrations to online methods, due to the serious charges many are facing and the clear loss of traction.

“It has been proven that their targeting of the monarchy has not gained enough support and their only hope to increase their support is to target the stalled constitutional amendment process, which may even be scrapped. Even then, it’s difficult to see the number of protesters return to last year’s levels,” he said.

“What is happening in Thailand is completely different from the situation in Myanmar,” he added.

Somsak on leaderless protests: It’s not a good idea

March 1, 2021: An iconic figure for the anti-establishment movement has warned against staging political protests without leaders, insisting that those wanting changes should “go home, regroup and start over.”. 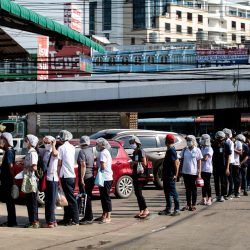 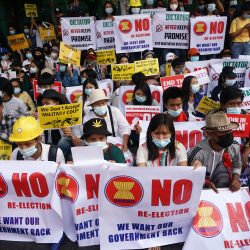