Cambodians on Sunday go to the poll the opposition parties have slammed as a “sham” and designed only to pave the way for Prime Minister Hun Seen to extend his 33-year rule.

The Human Rights Watch (HRW) has called the general election “not genuine” and the European Union and least three other countries, the United States, Japan and Australia, have announced they would not send observers to monitor the poll.

The National Election Committee (NEC) and the ruling Cambodian People’s Party (CPP) have reacted strongly to HRW’s statement which it described as politically motivated.

The HRW’s statement called into question the “arbitrary dissolution of the main opposition party, the Cambodia National Rescue Party (CNRP), surveillance, intimidation, detention and politically motivated prosecution of key opposition members,” adding that it was concerned over the crackdown on independent media, and laws restricting free speech.

Hun Sen on Friday hailed his success in eliminating “traitors”.  “Recently we took legal action to eliminate traitors who attempted to topple the government,” he said of the court ruling that disbanded the main opposition party.

Former opposition leader Sam Rainsy has called on Cambodians to boycott the election. The opposition has launched a movement that has come to be known as the “clean finger” campaign — a reference to the indelible ink used to mark the index finger of voters. 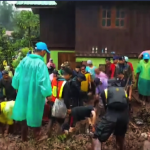