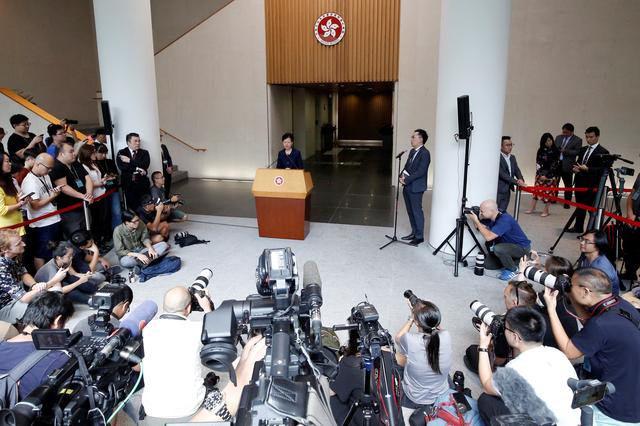 HONG KONG (Reuters) – Hong Kong leader Carrie Lam said on Tuesday she hoped a peaceful weekend anti-government protest was the start of an effort to restore peace and that the government would talk to peaceful protesters and tackle complaints against police.

Hundreds of thousands of protesters rallied peacefully in the Chinese-ruled city in torrential rain on Sunday in the eleventh week of what have been often violent demonstrations.

“I have explained and elaborated on two important areas of work that we are doing,” Lam told reporters. “One is an important fact-finding study in addition to a very robust system to investigate and look at the complaints against police over this prolonged period of confrontations and violence.”

Anger erupted in June over a now-suspended bill that would allow criminal suspects in the former British colony to be extradited to mainland China.

But the unrest has been fueled by broader worries about the erosion of freedoms guaranteed under the “one country, two systems” formula put in place after Hong Kong’s return to China in 1997, including an independent judiciary and the right to protest.

Further protests are planned in the next few days, including one by MTR subway workers on Wednesday, secondary school students protesting against the extradition bill on Thursday and a demonstration by accountants on Friday.

The chaos has spread overseas. Twitter Inc and Facebook Inc said on Monday they had dismantled a social media campaign originating in mainland China that sought to undermine protests in Hong Kong.

Sunday’s massive turnout, which organizers put at 1.7 million, showed that the movement still has widespread support despite chaotic scenes last week when protesters occupied the airport.

Some activists had apologized for the airport turmoil and protesters could be seen on Sunday night urging others to go home peacefully.

Aside from Lam’s resignation, demonstrators have five demands – complete withdrawal of the extradition bill, a halt to descriptions of the protests as “rioting”, a waiver of charges against those arrested, an independent inquiry and resumption of political reform.

“The second question I have repeatedly replied on various locations and I can give you this very clear commitment at the political level that the bill is dead,” Lam said. “There is no plan to revive the bill, especially in light of the public concerns.”

Police have been criticized for using increasingly aggressive tactics to break up demonstrations but there was a minimal police presence on Sunday and no arrests were made. More than 700 people have been arrested since June.

Lam said the police watchdog had set up a task force to investigate complaints.

Beijing has sought to deepen integration between the mainland and the special administrative regions of Hong Kong and nearby Macau, a former Portuguese-run enclave that returned to China in 1999. The State Council called on Monday for greater development of the so-called Greater Bay Area and to enrich the “one country, two systems” policy.

Hogg’s sudden departure was announced by Chinese state television on Friday and was seen as a signal to other multinationals, such as HSBC Holdings and Jardine Matheson Holdings, to support Beijing.

“One of the most important strengths is the rule of law,” she said.

U.S. Vice President Mike Pence urged China on Monday to respect the integrity of Hong Kong’s laws and repeated President Donald Trump’s warning that it would be harder for Washington to make a trade deal with Beijing if there was violence. 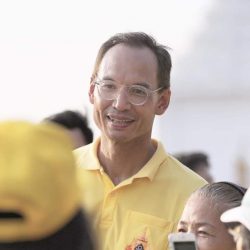 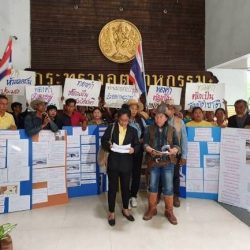