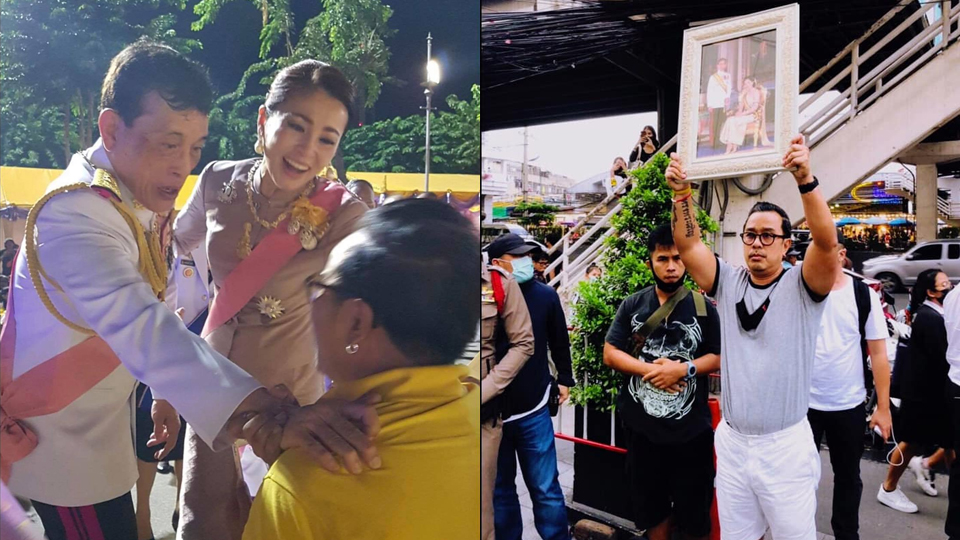 Their Majesties the King and Queen address Thitiwat Tanagaroon who defiantly held up a portrait of the late King Bhumibol Adulyadej and the Queen Mother Sirikit at an anti-government rally early this week. Thitiwat was among thousands of well-wishers who turned up in front of the Royal Grand Palace last night.

It was a rare moment that has both inspired and overwhelmed royalists across the country with a feeling of gratitude.

Their Majesties King Maha Vajiralongkorn and Queen Suthida mingled and personally exchanged words with well-wishers who turned out to greet them at the Royal Grand Palace where they had just presided over a merit-making ceremony for King Rama V on Friday night.

In an unprecedented gesture, Their Majesties stopped before a man who made headlines a few days ago when he defiantly held up a portrait of the late King Bhumibol Adulyadej and the Queen Mother Sirikit in the middle of an anti-government protest

The King was heard personally praising Thitiwat Tanagaroon for what he did amid a chant of “Long live Their Majesties” from the mostly yellow-clad crowd.

Thitiwat, who was there with his family, recalled in a Facebook post that the Queen appeared to recognize him and turned to tell the King that he was the same man who defied the anti-government protesters outside the Central Pinklao shopping mall earlier this week.

“I grant you my support,” she was heard telling Thitiwat. “Thank you very much.”

His Majesty then was heard telling Thitiwat: “Very brave. So good. Thank you.”

The King then placed his right hand on the man’s left shoulder as Thitiwat, in a voice choked with emotion, responded: “Long live the King. This is a very great honour for me.”

Thitiwat recorded the moment with his mobile phone and posted it on his Facebook page, with a caption: “I am fainting. Their Majesties recognized me.”

The post quickly went viral and became the biggest talk of the town.

He also posted a photo of the King placing his hand on his shoulder while speaking to him, as the Queen looked on smiling.

“This is the best moment in my life,” Thitiwat commented in the post.

As Their Majesties moved away, the bespectacled Thitiwat was seen cryingemotionally as he was consoled by members of the crowd.

“Fight on, Your Majesties,” the crowd kept chanting as the Queen was seen flashing a victory sign.

Clips recorded by Thitiwat and others showing the close encounter with the King went viral on social media last night. There were also clips of the King’s daughters, HRH Princess Bajrakitiyabha and HRH Princess Sirivannavari, sharing moments of warmth with the crowd as they accompanying Their Majesties.

The event took place as thousands of royalists rallied across the country to declare their support for the royal institution.

The rallies were in response to the ongoing anti-government demonstrations, including the one at the Central Plaza Pinklao mall where Thitiwat showed up.

He held up a portrait of the late King Bhumibol Adulyadej and the QueenMother Sirikit, and addressed the protesters. Thitiwat explained that he wanted to show solidarity with other royalists all over the country. His action received wild publicity both in the mainstream and social media.

Thitiwat owns a shop at Central Plaza Pinklao. His Facebook profile states that he is self-employed and lives in Bangkok. 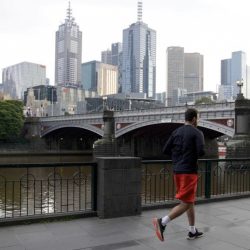 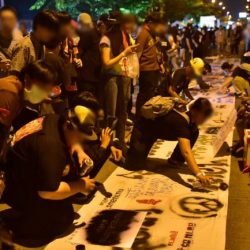