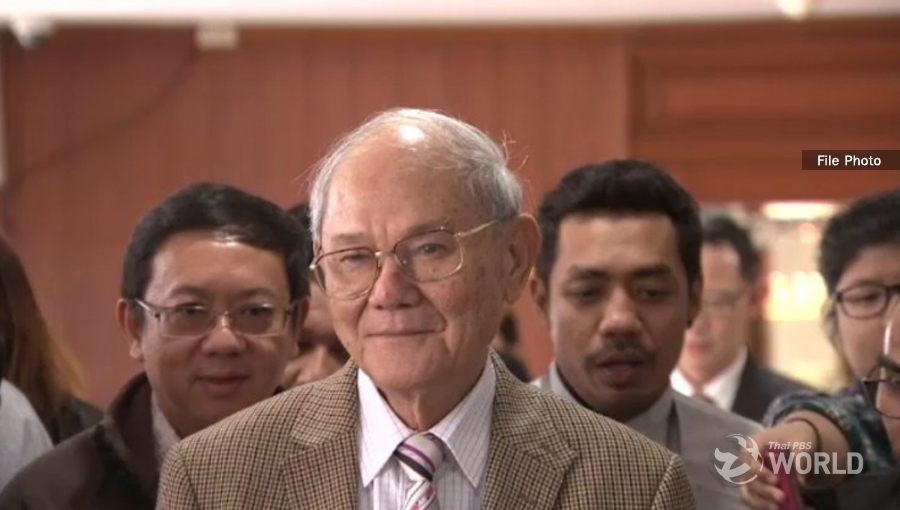 Every coup-maker of the past two decades needed his service. Seizing power doesn’t end with just toppling the incumbent governments. Coup announcements and executive orders need to be issued. And more importantly, interim constitutions need to be drafted.

And his track records have proven that nobody could have done a better job with all these necessary paperworks than Meechai Ruchuphan.

But after having played a prominent role in serving the perpetrators of the last two successive coups, Meechai insists that he is no lackey of the military.

Meechai, who is chairman of the junta-appointed Constitution Drafting Committee (CDC), said he was inadvertently dragged into a few coups despite the fact that he hardly knew any of the generals involved. Meechai has been best known for his legal expertise that coup-makers badly need when it comes to drafting various executive orders. And he never disappointed them.

But in his own words, it doesn’t mean that he would follow every marching order from the military.

Speaking at a media thank-you party at a Bangkok hotel Friday night, Meechai recalled the circumstances in which he was dragged into the coup led by then army chief General Sonthi Boonyaratglin against the Thaksin Shinawatra Government in 2006. He recalled that without any prior notice a group of army officers fetched him from his home and took him to the army headquarters on Rajdamnoen Avenue.

“It was my first time in there and someone told me a coup was under way. Believe or not, I didn’t even know at the time who was leading the coup. There were three of them there and I knew only afterward that they were General Sonthi, General Winai Patthiyakul and General Ruangroj Mahasaranont,” he recalled.

The three generals were among the most powerful military figures at the time. Gen Winai was secretary general of the National Security Council while Gen Ruangroj was supreme commander.

“I was asking myself why they took me in even before a coup had yet to happen. There had not been a single announcement (from the coup makers). I was wondering whether I was going to be doomed with them,” Meechai said.

Meechai found himself in similar circumstances again four years ago. His service was enlisted once again by the people he didn’t know. “I didn’t know Gen Prayut and didn’t even know what he looked like,” he said.

Like in the previous coup in 2006, Meechai was entrusted with working with a group of military officers to draft an interim constitution – a legal must for coup-makers to make sure that their power seizure and absolute rule is constitutionally legitimized. To demonstrate that perception about his close ties to the military is a myth, Meechai recalled a chance meeting with General Apirat Kongsompong, the newly-appointed army chief, at a shopping mall not long ago.

He said Gen Apirat approached him and introduced himself. “Apirat who?” Meechai recalled his reaction.

And it just dawned on him then that Gen Apirat is the son of Gen Sunthorn Kongsompong, one of the key leaders of the coup against the Chatichai government in 1991.

Meechai was president of the Senate at the time and claimed that even under military dictatorship then he was by no means an unquestioning subordinate of those in power.

Meechai recalled an incident in which General Sunthorn instructed members of the Senate to sign a petition seeking a special parliamentary session. But Meechai said he was opposed to the idea on the grounds that the Senate was supposed to be politically neutral.

He said General Sunthorn was furious when the bid was aborted.