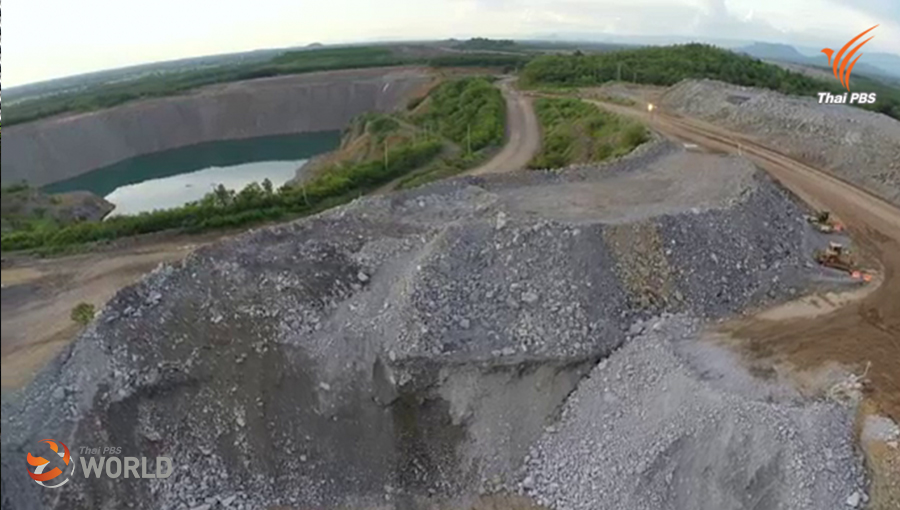 New developments in negotiations between the Thai government and mining company Kingsgate Consolidated have left the public worried that Thailand will either have to pay billions of baht in compensation or leave many of its residents struggling with adverse health and environmental impacts.

Australia-based Kingsgate filed a complaint against the Thai government with an arbitral tribunal in Singapore. The company claims that PM Prayut Chan-o-cha violated the Thailand-Australia free-trade agreement when he ordered the January 1, 2017 closure of its Chatree gold mine.

Prayut issued the order in his capacity as chief of the National Council for Peace and Order (NCPO) following locals’ long-standing complaints that the mine was damaging their health and environment. The gold mine, which straddles Phitsanulok, Phetchabun and Phichit provinces, was operated by Kingsgate subsidiary Akara Resources.

If the tribunal rules in favor of Kingsgate, Thailand may end up paying compensation of about US$750 million (Bt25.23 billion).

When is the ruling expected?

The tribunal was initially scheduled to issue its ruling on October 31, but both parties have asked for the verdict to be postponed to January 31 next year, to give them more time to conclude their negotiations.

According to Kingsgate, talks with the Thai government are making good progress. The company indicated that it expects to receive licenses to resume and expand its mining operations in Thailand, make the most of Board of Investment benefits and get state backing to list Akara Resources on the Stock Exchange of Thailand.

Premsinee Sinthornthamatuch said her house was damaged by the mine’s operations and is now the last residence standing in Moo 9 of Ban Khao Mor in Phichit’s Thab Khlo district. About 100 local families were forced to relocate after the Chatree mining operations launched in 2007.

“We have suffered from the mine operation’s impacts for so long, that many of us are now resigned to our fate,” Premsinee said. “We believe that if the mine is allowed to reopen, we won’t be able to fight against it.”

She was responding to recent reports suggesting that Kingsgate will win the case.

“I wonder why the battle is only focusing on compensation. Why isn’t our suffering being taken into account? Why doesn’t the tribunal look into what the mining operator has done to the environment and health of local people,” she asked.

Local people had, in fact, been protesting against Chatree mining operations from the outset due to their adverse impacts. They called on the Administrative Court for help in 2010 and four years later the court ordered Akara Resources to suspend its metallurgic operations. The court also blocked a permit allowing the firm to expand its factory.

In 2015, random blood tests among locals revealed higher than safe levels of heavy metals, which are used in gold mining. The Industry Ministry then suspended Akara Resources’ operations for 30 days.

In May 2016, locals asked PM Prayut – who was then prime minister in the post-coup junta – to shut down the Chatree mine.

Kingsgate first tried to negotiate with Thai authorities, but when talks failed it decided to take the case to the Singapore-based arbitration tribunal. Given that an order from a junta leader is not accepted under international law, the Thai government is clearly at a disadvantage.

Even the Thailand Arbitration Center (THAC) has described the order as “very controversial”. According to its website, the government paid an American lawyer Bt70 million in 2018 to fight the case. This was the first installment, and total legal costs for Thailand are expected to hit Bt600 million before the case is resolved.

Industry Ministry permanent secretary Kobchai Sungsitthisawad, who leads the panel trying to settle the dispute with Kingsgate, has not revealed how much the battle will cost Thailand. However, he indicated that the negotiations were based on the tribunal’s advice and would work to the benefit of all sides.

“Our decision to enter negotiations does not mean we will lose the case,” he insisted. “But I must say, it’s better to settle a dispute out of court rather than be forced to follow the tribunal’s ruling.”

Lertsak Kamkongsak, an environmentalist and leader of the Commoners Party, said he does not understand why the government will not reveal the defense strategy it used at the tribunal. He believes that authorities should have collaborated with local residents affected by the mine.

“As far as I know, Thailand has barely revealed the mining operation’s impact on people’s health and the environment,” said Lertsak, citing information he said came from informed sources.

Korbchai insists the defense strategy was carefully prepared by the panel, which includes representatives from the Attorney General’s Office, the ministries of Foreign Affairs, Commerce and Finance, as well as the Auditor General’s Office, aided by experienced legal advisors.

“As for the negotiations, we have proceeded in line with laws keeping the balance of economy, society, environment and community health in mind. We will be fair to all stakeholders,” Korbchai said.

Who should be held responsible?

Lertsak said the government must not hand Kingsgate any benefits beyond the scope of the dispute. For instance, Akara Resources should not be granted mining or exploration licenses for other plots of land.

“We are going to closely monitor the government, Kingsgate and the arbitral tribunal,” he said. “We will raise public awareness of the issues at national and international levels.”

Chonlanan Srikaew, leader of the opposition Pheu Thai party, said the government should not sacrifice national interests in an effort to settle a dispute sparked by PM Prayut’s order.

“Why should Thailand or the Thai people pay for Prayut’s mistake?” he asked.

His opinion is shared by the Network of Ore-Owning People, which points out that the Constitutional Court has already ruled that, as NCPO chief, Prayut was not a state official. Hence, if the Thai government loses the case because of the NCPO chief’s order, the Thai public should not have to pay for the damages. Neither should the country give up a large portion of its national interest to settle the dispute.

“Prayut alone should be held responsible,” the network said in a statement earlier this month.

Israel closes borders to all foreigners over Omicron