Governor says extraction plan may be executed if risks are acceptable

Chief of the Tham Luang rescue operation Narongsak Osotthanakorn said this morning that he might order the extraction of the survivors if the risks are acceptable even though they are not 100 percent physically fit.

Speaking at a daily press briefing, the former governor of Chiang Rai admitted there are major  challenges in extracting the 13 survivors out of the flooded cave, saying that rescuers have to spend six hours to get to them and another five hours to extract them out one after another.

He expressed serious concern with rains which might bring more water into the cave, but he said he could not afford to let water level in the cave to rise again and might choose to execute the extraction plan if the risks are acceptable even though the 12 boys and their coach are not 100 percent physically fit.
The governor said officials must make an assessment on how much water will flow into the cave as a result of expected rainfalls and how much water is being drained out, stressing that he cannot afford to let the water level in the cave to rise again.

He disclosed that 13 sets of diving gears and extraction teams have been  prepared today.  Two rescuers will accompany one survivor, he said.

The governor, however, reported that that 30 field teams from various units have been carrying on with their searches for cavities or shafts which could offer potential alternative routes into the cave.

Meanwhile, the eight bird nest collectors from Trang province were this morning recalled by the Navy SEAL team as they were about to leave Chiang Rai airport for a flight back to their home town.
An emergency phone call was placed to the eight volunteers as they were waiting for a flight to Trang province from an army officer who asked them to return to Tham Luang cave as the SEAL team wants  them to join the rescue operation.  The volunteers are known for the cave scaling skills which will be necessary if the rescue teams decide to get the suvivors out through shafts or openings in the cave.
Mr Sawat Thaveerat, a senior official of the Department of National Parks, Wildlife and Plants Conservation, said the bird nest team immediately joined a 15-man team of the department to search for cavities on Doi Pha Mee mountain which could offer an alternative route into the cave.
The eight bird next collectors from Ko Libong in Trang province arrived at the cave last week to offer their skills and experience in scaling steep cliffs and in descending down deep captivities or chimneys in mountains.
Third Army Region deputy commander Maj-Gen Chalongchai Chaiyakham said the ground forces outside the cave had been trying to pinpoint the location which is closest to the mound where the 13 survivors are being stranded and to look for cavities in the surrounding area. 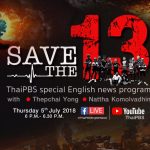