It shouldn’t be a surprise if Prime Minister Gen Prayut Chan-o-cha has decided which of the political parties he will align himself with. But for the time being, he still wants to keep his cards close to his chest.

When pressed by reporters again today for an answer on his political future, Gen Prayut had this to say: “Let them approach me first, and then I’ll decide…The answer will come when it’s time to nominate candidates for prime minister.”

Gen Prayut was referring to nomination of candidates for prime minister by political parties that will be competing in the upcoming general election.

“But that doesn’t mean that I will readily accept their offer. I want to see if their offer matches what I have in mind,” the prime minister said.

Of all the political parties that will run in the election, Palang Pracharat Party, whose  founders and core members include four of Prayut cabinet members, has openly declared its support for Prayut’s return as prime minister but has yet to formally approach him.

Commenting on a meeting scheduled for December 7 between the so-called “Five Rivers” and representatives of political parties, he said it will be a venue to listen to politicians’ views on the election and the lifting of political restrictions.

The “Five Rivers” are made up of the Nation Council for Peace and Order, the cabinet, the National Legislative Assembly, the Constitution Drafting Committee and the Election Commission.

Asked to comment on a recent opinion poll which showed Pheu Thai’s election strategy chief Khunying Sudarat Keyuraphan as the most favoured contender for the premiership, the prime minister tried to play it down, noting that the poll represented only about 2,000 people out of the country’s population of more than 60 million.

Meanwhile, Deputy Prime Minister Gen Prawit Wongsuwan apparently reaffirmed today that the election will be held on February 24 despite doubts by the government’s critics.

Gen Prawit flashed two fingers with one hand and four fingers with the other in what reporters interpret as signaling February 24 as the election date.  He also voiced support for Gen Prayut to return as prime minister but stopped short of saying which of the political parties would nominate him.

Deputy Minister Wissanu Kreu-ngarm  said there was no need for Prime Minister Prayut to be a party member in order to be nominated for the premiership.

Citing legal procedure, he said before the end of the deadline for the registration of election candidacy, political parties could each nominate a maximum of three candidates for the premiership.

He reiterated the issue about lifting of political restrictions will be cleared up at the December 7 meeting between political parties and the “Five Rivers”. 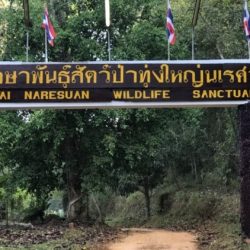