After 97 days behind bars, former chairman of the United Front for Democracy against Dictatorship (UDD) Jatuporn Prompan was released from Bangkok remand prison this evening (Thursday) after the Appeals Court granted him bail.

Jatuporn and two other UDD members were held in custody at Bangkok remand prison after they were indicted by the public prosecutors for allegedly leading red-shirt protesters to lay siege to the residence of the late Privy Council president Prem Tinsulanonda in 2014.

The Criminal Court rejected his bail application, but his lawyer took the case to the Appeals Court which, today, agreed to release him on 300,000 baht bail, which will be confiscated if he breaks the bail conditions.

Jatuporn is among inmates granted a royal pardon in another court case – criminal defamation against former prime minister Abhisit Vejjajiva, on the occasion of King Maha Vajiralongkorn’s birthday on July 28th and scheduled to be released yesterday. He was not released however because of the Prem Tinsulanonda case.

Asked whether he will get involved in political activities again, Jatuporn said he will consult his friends and supporters first. 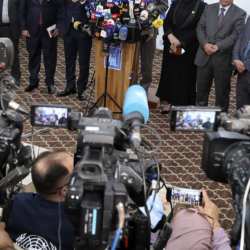