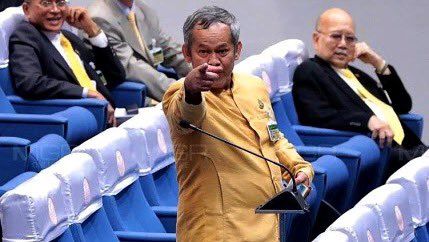 Senator Kittisak Rattanawaraha, who challenged Pheu Thai MP Yutthapong Charassathien in parliament to a fist-fight today (Friday), has admitted that he lost his cool because of Yutthapong’s non-stop bad-mouthing of other MPs.

He said that he was not a priest and could not stand the Pheu Thai MP, so he snapped back and then walked toward him to challenge him to a fight. Yutthapong made a hand gesture signaling that he would not accept the challenge.

The bickering between Mr. Kittisak and Mr. Yutthapong stems from Pheu Thai’s criticism of the government’s policy on the suppression of corruption, during which he cited several cases of alleged graft such as the Interior Ministry’s plan to seek a 7.7 billion baht loan to purchase fire-fighting trucks and the Laem Chabang deep-sea port phase 3 project.

Palang Pracharat MP for Bangkok, Sira Jenjakha, protested that the fire-truck project was not part of the government’s policy. More MPs from opposing camps joined the fray.

Prime Minister Prayut Chan-o-cha, who was then attending the meeting, stood up and asked for permission to leave the meeting for a business appointment with the chairman of ICAO. He then departed.

Yutthapong, who was still in the debate, shouted at the Prime Minister’s back asking whether he was running away. This triggered another round of protests from Palang Pracharat MPs demanding that he withdraw the comment.

The Pheu Thai MP agreed to retract the question but, again, taunted his protesters by calling them second-rate MPs like “10-baht supporting actors”. 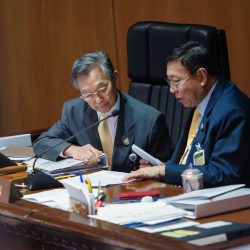 The opposition demands Seripisut be allowed to continue in the debate 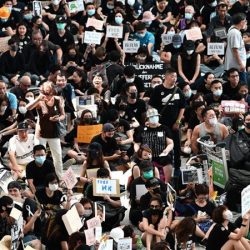