The Fine Arts Department is on high alert and working around the clock to save the country’s historical parks from heavy rainfall caused by the recent Tropical Storm Dianmu.

To safeguard historical buildings and cultural relics, barriers have been built along the Chao Phraya River in Ayutthaya province, 80 kilometers north of Bangkok.

Meanwhile, in the northeast, soldier and volunteers have been working day and night shoring up defenses with sandbags and using high-powered pumps to drain water from the Phimai Historical Park. The 11th-century Khmer ruins have been submerged by floodwater caused by the storm and exacerbated by extreme monsoon downpours.

Last week Thailand was badly hit by tropical storm Dianmu, which left more than 120,000 households underwater in the north and northeast.

The Fine Arts Department recently confirmed that the archaeological sites of Sukhothai, Si Satchanalai, and Kamphaeng Phet have been well protected against flooding.

Many parts of Sukhothai and Si Satchanalai were inundated for a few days, according to the Office of the Fine Arts Department in Sukhothai, waiting for the water to be drained. The 12th-century walls of Wat Phra Non (Reclining Buddha) Temple and Thung Setthi fort were damaged falling trees, although fortunately Kamphaeng Phet Historical Site was spared.

Many splendid cultural and artistic edifices of ancient Thailand have been discovered in Sukhothai, Si Satchanalai, and Kamphaeng Phet.

Repeat of the 2011 Great Flood feared

Flood warnings were issued last week, leaving many people to fear a repeat of Thailand’s severe floods of 2011. Following the extreme rainfall, the Chao Phraya Dam in Chai Nat province, 190 kilometers north of Bangkok, has discharged 2,749 square meters (roughly equivalent to 230 sedans) per second, making room for more water from the north to enter.

The large amount of water has put the Ayutthaya Historical Park in grave danger.

Thailand had the worst floods in modern Thai history ten years ago, with one-third of the country underwater.

Back then, the Chao Phraya, Lop Buri, and Pa Sak rivers, which flow through Ayutthaya province, burst their banks and left the city under water. The Ayutthaya Historical Park, a Unesco World Heritage Site, was flooded and damaged, necessitating a time-consuming and painstaking restoration by local and foreign archeology teams.

Last week, the Fine Art Department put up 2-meter-high barriers to protect the historic Wat Chaiwatthanaram; a 400-year-old temple on the west bank of the Chao Phraya River.

The seasonal monsoon in Thailand will last until the middle of October. 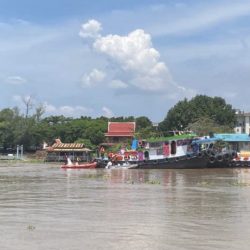 Antigen tests kits can now be sold in shops and online