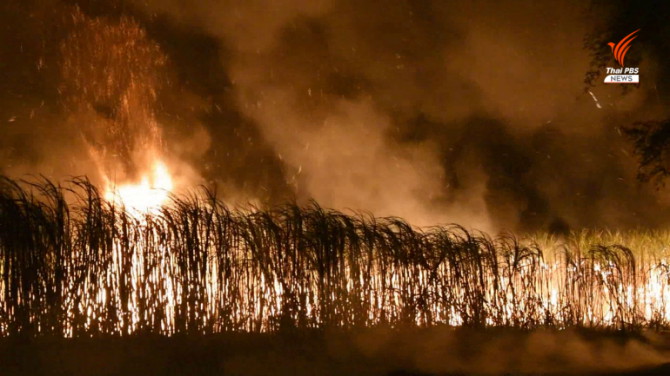 Sugarcane growers, who burn their crops before harvesting, will be charged 30 baht/tonne for the burnt sugarcane delivered to sugar mills, while the mills will be levied 12 baht/tonne for accepting burnt cane exceeding the set limits.

Industry Ministry spokeswoman Ms. Suchada Taensap said today that the measure is intended to discourage sugarcane farmers from burning their crops to save labour costs.

Widespread sugarcane burning has become the norm in many provinces during the harvest season, despite the fact that the practice is illegal and violators face heavy fines.

The fees will be charged by the Sugarcane and Sugar Committee’s Office and paid to farmers who do not burn their crops, as an incentive to continue the practice.

During the 2018-19 sugarcane harvest season, about 20 million tonnes, or 49.1% of all the cane that were sent to sugar mills was burnt.

Ms. Suchada said that the Ministry of Industry has sought cooperation from the operators to reduce their production capacity and emissions to help ease the pollution, which is still affecting many provinces.

Rock crushing operators have also been told comply with regulations to prevent the spread of dust.

In Bangkok today, Greenpeace Thailand and several civic groups held a rally to urge the Government to address the worsening pollution quickly.

The groups proposed that the Government reduce the 50-micron safety threshold, set by the Pollution Control Department, to the level set by World Health Organization, namely 35 microns average daily level or annual average of 12 microns.

They also proposed that the Government issue a law to regulate the discharge of pollutants into the atmosphere by industry, vehicles and power plants.

The army deployed 500 troops and 44 water trucks today to clean up several busy thoroughfares in the capital to help reduce airborne dust.