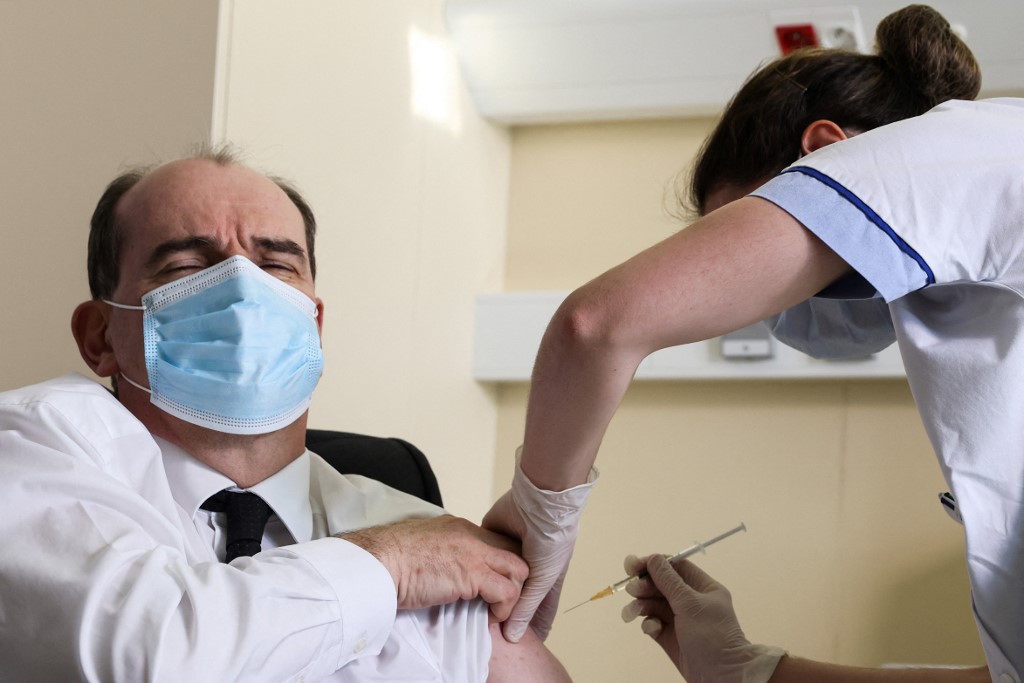 Prime Minister Jean Castex, 55-years-old, reacts as he is vaccinated with the AstraZeneca Covid-19 vaccine at the Hopital d Instruction des Armees Begin, in Saint-Mande, on the outskirts of Paris, on March 19, 2021.(Photo by THOMAS COEX / POOL / AFP)

Several European countries resumed AstraZeneca vaccinations Friday after an all-clear from EU regulators, as US President Joe Biden was set to meet his goal of having 100 million Americans inoculated weeks ahead of schedule.

Worries that AstraZeneca’s Covid-19 vaccine may cause blood clots have seen countries from Venezuela to Indonesia pause its use in recent days, a setback for the drive to vaccinate populations against a virus that has killed nearly 2.7 million people.

Germany and Italy, both of which are attempting to fight off a third wave of the coronavirus, announced they were using the jab again as of Friday after the European Medicines Agency said it was “safe and effective”.

Other European countries including the Netherlands, Spain and Portugal are also ending their suspension, while in Asia, Indonesia said it would follow suit.

The vaccine was also brought back into use in France on Friday — but just hours later, the national health regulator recommended it should only be given to people aged 55 and over, given the reported blood clots were only seen in younger people.

Prime Minister Jean Castex — who is himself 55 — received an AstraZeneca dose on Friday in a bid to reassure citizens that it is safe.

Around a third of France’s population will enter a new month-long, limited lockdown from Saturday, after the country recorded its highest new caseload in nearly four months.

Non-essential businesses will close in Paris and other areas hit by the new restrictions, mainly in northern France, although schools will stay open.

In neighbouring Germany, infection rates are once again rising exponentially.

Lars Schaade, vice president of the Robert Koch Institute for infectious diseases, said there were grim signs of a return to a situation of “many severe cases and deaths, and hospitals that are overwhelmed”.

After weeks of fast-changing and sometimes confusing messaging from officials, some members of the public remain reluctant to receive the AstraZeneca vaccine.

But in Spain, 22-year-old medical student Florentino Quinteiro said he was not at all worried after receiving a dose last month.

“The population isn’t always familiar with the situation, but we’re not scared,” he said of his colleagues.

“In pharmacology there’s always a trade-off between benefit and risk — for example, contraceptives also sometimes cause blood clots,” he said.

Denmark, Norway and Sweden are yet to bring the jab back into use, pending further review.

The World Health Organization is due to publish Friday the conclusions of its own safety assessment, after repeatedly encouraging countries to continue using it.

AstraZeneca’s shot had been billed as a game-changer as it is cheaper and easier to store than some of its rivals, making it more accessible to poorer nations.

It is a vital part of Covax, the global drive to ensure an equitable distribution of vaccines.

Papua New Guinea is among the countries in desperate need of vaccines as it battles a “rapidly escalating” Covid-19 crisis, with authorities approving the use of mass graves and nearly 50 percent of tests coming back positive in some areas.

Some 8,000 AstraZeneca doses are being delivered from Australia, but Jennifer Tierney of Medecins Sans Frontieres warned it might be too little, too late.

“What’s needed is a bigger response, now, before the situation gets out of control,” she said. “Papua New Guinea needed these vaccines yesterday.”

Use and production of Russia’s Sputnik V vaccine has also been ramping up, with the Philippines becoming the latest country to give it the green light Friday, and Indian drugmaker Stelis Biopharma signing on to produce 200 million doses.

And in the United States there was cause for celebration as medics prepared to administer the nation’s 100 millionth vaccine dose.

With infection rates falling, there are hopes that the world’s worst-hit country is headed for a powerful rebound.

“It is a time for optimism,” Biden said in a White House speech. But he also cautioned: “It’s not a time for relaxation.”

After a year that has devastated the economy and restricted daily freedoms for billions, a UN-sponsored report found Friday that the pandemic had done surprisingly little to alter people’s happiness.

While the World Happiness Report found that people in a third of the countries reported more negative emotions, on average, people did not report feeling worse than in previous years.

“One possible explanation is that people see Covid-19 as a common, outside threat affecting everybody and that this has generated a greater sense of solidarity,” said John Helliwell, one of the report’s compilers 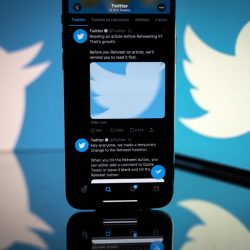 Twitter asks users to weigh in on rules for world leaders 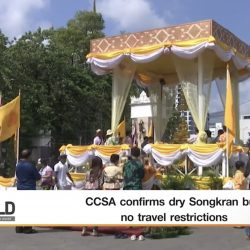