“I am here to stand beside transgender women. I used to suffer from the patriarchy, the oppression and the discrimination.”

“I feel the unhappiness, I feel the discomfort of all transgender women in their own families, their education and in their workplaces. It’s not comfortable and it’s not fun at all to face unfair discrimination from society.”

Drawn from her own experiences, Chitchapa is among many transgender women who have been discriminated against for their chosen identity. Her recent account was when she was banned from entering an exam hall, because she was dressed as a woman. Unfortunately, this incident was just one of the many struggles that Chitchapa has had to face.

“I have faced so much [prejudice] since I was born,” she says. “[My family] always consider that I was born male, so I should be a man. So, whenever I want to express myself, as I am a woman inside, everyone thinks that it is wrong and it is going to be an embarrassment for my family.” The only person, however, who truly understood Chitchapa was her mother, who supported her education and being her true self.

Such injustice inspired Chitchapa to become a lawyer and to join the Lawyers for Women’s Rights Network, founded by SHero. It is a non-profit organisation which aims to de-normalise gender-based violence. Through this, she hopes to help other women, especially in the LGBT community, to demand the rights they deserve and, most importantly, to tackle the patriarchal beliefs which are still oppressing these people.

“As a transgender lawyer, I think I would create the awareness first, to educate them with the right knowledge.” She explained that, once people have the right knowledge and perception of LGBT rights, people will become more empathetic towards such people and will, eventually, help such people to speak up for themselves.

As prejudice and violence against certain genders still persist, creating a network of young lawyers who are specialised in women’s and LGBT rights is important, particularly in terms of providing emotional support to the victims and finding ways to combat the victim-blaming attitude in Thai society.

SHero founder Busayapa Srisompong, who’s behind the project, explains that the Lawyers for Women’s Rights Network started as a training program that teaches young lawyers how to approach victims of gender-based violence. The main mission, she explains, is to create a collective of lawyers who work together to explore the loopholes in the Thai legal system and to promote a survivor-centred approach.

“In law school, we don’t usually talk about the trauma, or the mental health implications,” she explains. “For example, [we don’t talk about] how difficult it is for gender-based violence survivors to speak up, or to go through the victim-blaming justice system. So we want to start a conversation and engage with people who want to become pro-bono lawyers and gender-based violence advocates.”

Many other lawyers who joined the movement also feel the need to tackle the systemic oppression against women and other genders, which they strongly believe will play a huge role in ensuring justice and fair treatment for these people.

One of them is Chonnikarn Phatanaveerangkul, who said that she would like to use her knowledge to help people who are in need, but are unable to get access to legal advice.

“I believe that, as a lawyer, we are in a position to impact policy makers and leaders and, of course, people like myself. We are capable of seeking justice for the victims and eliminating sexual and gender-based violence.”

Another lawyer, Patsalin Reephrom, also feels that being part of the network is a huge responsibility. She is hopeful about seeing the newer generation understand gender-related issues a lot more and be willing to join a movement to eliminate injustice against women and people of other genders.

“So, right now, the next generation of people see gender-based violence as a very important issue and they come with us to campaign and raise awareness among people.”

Chitchapa also believes that female lawyers, including transgender lawyers like herself, have the power to offer compassion and help to the victims.

“We should give them a hand, give them assistance to alleviate their pain and educate people in society to be aware of how we perceive the LGBT community and women’s rights as well.” 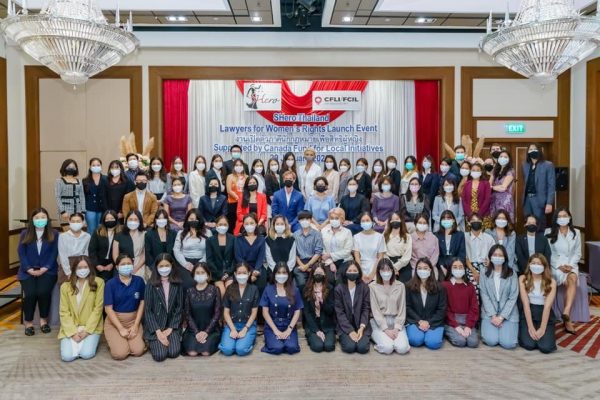 Having up to 75 young lawyers in the network, Busayapa feels much more hopeful than before that they will see more people joining the movement, to de-normalise violence and prejudice against women and the LGBT community. At the same time, the SHero founder is glad to see that such topics are being discussed more often, especially using the power of social media.

“Of course, I feel so empowered,” she said with pride. “It makes me realise that there’s actually hope, because sometimes you cannot just work alone, and sometimes you feel isolated, because not many people understand the systemic oppression. Now we have some people who see us, are willing to see the challenges and try to combat the violence together.”

As for the next step for the lawyers’ network, Busayapa hopes to set up a legal aid service, to help gender-based violence survivors, as well as to support women and the LGBT community.

While acknowledging that the victim-blaming attitude still exists in Thai culture, Busayapa reminded people facing any kind of injustice to never be afraid to speak up for themselves. Most importantly, they should find a support system, such as talking to someone they trust, which would help lift some of the weight off their shoulders.

“You have every right to stand up for yourself and your voice matters.”