Election ballots cast by both local and overseas early voters and which have already been sorted at Lak Si post office in Bangkok, are being transported in a convoy of trucks to their destinations in 350 electoral constituencies nationwide.

The departure of the fleet took place this morning and was presided over by Election Commission secretary-general Jarungvidh Phumma and Thailand Post Company managing director Mrs. Samorn Therdthampibul.

A border patrol policeman rode on each of the GPS equipped vehicles to make sure that the ballot boxes arrive safely at 15 post offices in Ayutthaya, Si Racha, Kabin Buri, Ratchaburi, Hat Yai, Den Chai, Lamphun, Ubon Ratchathani, Udon Thani, Chumporn, Thung Sog, Phitsanuloke, Nakhon Sawan, Nakhon Ratchasima and Khon Kaen.  Later, the boxes will be distributed to all the 350 electoral constituencies by the end of Saturday to be counted along with ballots to be cast this Sunday.

An informed source said that Pheu Thai was the only political party to send representatives to observe the process at Lak Si post office.

Meanwhile, Bangkok deputy governor Sakolthee Patthiyakul said today that city officials will start taking down all the party campaign posters at 6pm on Saturday, with the exception of thank-you posters approved by City Hall. 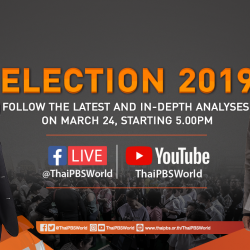 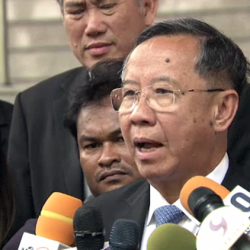