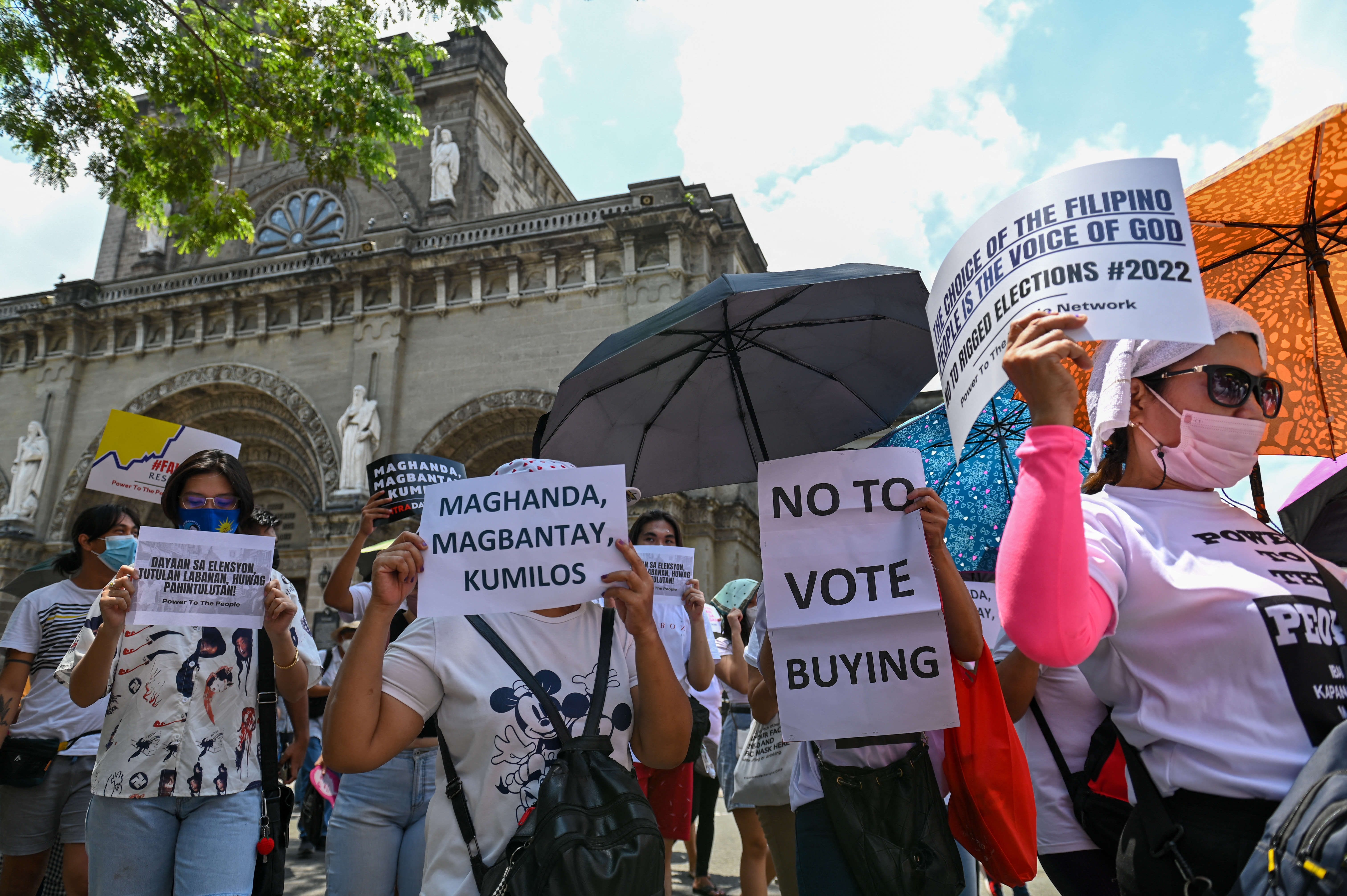 People take part in a rally calling for a honest election in Manila on May 6, 2022, ahead of the May 9 presidential election. (Photo by CHAIDEER MAHYUDDIN / AFP)

Philippine election rivals traded allegations of dirty tricks and vote-rigging Friday, in the final stretch of an acerbic campaign that is tipped to bring the son of former dictator Ferdinand Marcos to power.

After months of fierce campaigning marked by relentless misinformation and an online whitewashing of the country’s violent history, rivals Ferdinand Marcos Jr and Leni Robredo implicated each other in underhand tactics.

Marcos Jr — the son of the late dictator and notoriously kleptocratic first lady Imelda Marcos — is predicted to win Monday’s poll by a landslide.

The Marcos campaign on Friday urged supporters to “protect their votes” against unspecified attempts at vote-rigging.

“We’ve already won!” Marcos Jr said. “Just make sure you guard the votes on Monday — don’t sleep… we know that when we sleep, a lot of undesirable things happen.”

The Marcos campaign also accused Robredo of being “toxic, divisive and acrimonious” and having “associated themselves” with shadowy political groups.

Robredo has campaigned on a promise to clean up the Philippines’ chronically corrupt politics.

Despite her deficit in opinion polls, few are ready to completely rule her out, as febrile rumours swirl about the accuracy of polls that currently put her on 23 percent of the vote versus Marcos’ 56 percent.

With all still to play for, her campaign took legal action on Friday to bat back potentially damaging rumours that she is in league with the Communist Party.

Unproven allegations that party founder Jose Maria Sison, who lives in exile in the Netherlands, was advising her campaign recently resurfaced in Marcos-allied media.

In a complaint affidavit filed with the prosecutor’s office Robredo’s spokesman called the allegations “fabricated” and “fictitious”.

“This is not a vlogger, it’s not some random influencer on social media putting out criticisms. This is supposedly a respectable member of the journalism profession.”

– Echoes of the dictator –
Despite a lack of evidence, the allegations have circulated widely on Facebook, which is extremely popular in the Philippines, gaining hundreds of thousands of interactions.

Misinformation seeking to discredit Robredo as stupid, unfriendly or even a communist has surged during the election season.

Communist rebels have waged a decades-long insurgency in the country.

Red-tagging — accusing someone of being a communist sympathiser — has intensified under President Rodrigo Duterte and has resulted in the deaths of many activists, journalists and lawyers.

Robredo hit back on Friday, accusing Marcos Jr of being a “liar”.

“I pity the Filipinos who were deceived by him,” she told reporters in the central city of Sorsogon.

The allegations against Robredo carry echoes of the elder Ferdinand Marcos’s tactics of discrediting enemies, justifying his dictatorial rule and retaining US Cold War support by playing up the spectre of a looming Red Peril that was hell-bent on taking over the country.

For much of the campaign, Marcos Jr has eschewed detailed policy pronouncements, instead framing himself as uniquely qualified to “unify” the nation.

He also portrayed his father’s rule — which saw widespread human rights abuses, rampant corruption, international opprobrium and the cratering of the Philippine economy — as a gilded age.

Behind the scenes, he has built a potent coalition of the country’s ruling families who can deliver blocks of votes on mass.

Marcos’ running mate is Sarah Duterte, the daughter of the outgoing president, who has strong domestic support for his unvarnished political style and a bloody drug war that rights groups estimate has killed tens of thousands in extrajudicial executions.

The duo’s campaign on Friday promised to reopen the economy after Covid-19 lockdowns, invest in infrastructure and continue Rodrigo Duterte’s “campaign against illegal drugs and criminality” which is subject to an investigation by the International Criminal Court.

But the prospect of a Marcos presidency has alarmed rights groups and Catholic church leaders, who doubt his commitment to democracy and fear his administration will weaken checks and balances on governance and worsen corruption.

Saturday will see both sides hold enormous rallies in Manila for the last day of campaigning — with hundreds of thousands projected to gather just a few kilometres (miles) apart to cheer their political idols and enjoy a barrage of Pinoy pop. 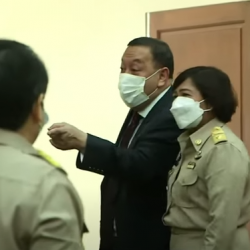