Days of dread and terror at Bangkok Remand Prison 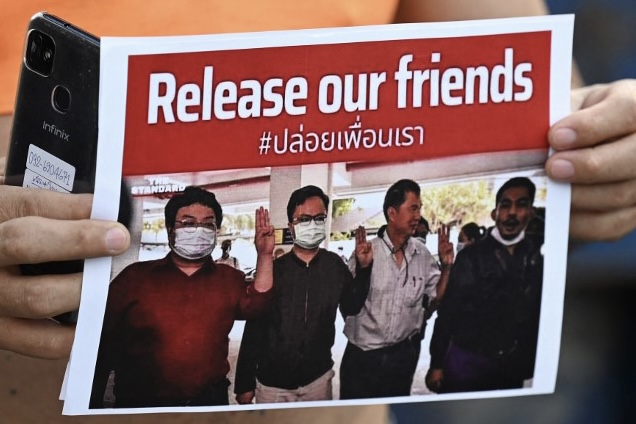 A pro-democracy protester holds a sign while calling for the release of anti-government protest leaders outside Bangkok Remand Prison in Bangkok on March 9, 2021. (Photo by Lillian SUWANRUMPHA / AFP)

Anti-establishment protest leaders imprisoned on charges of lese majeste and sedition claim their lives may be in danger behind bars.

They recently voiced fears of being assaulted or even killed in jail, though prison authorities have dismissed their concerns about possible violence.

Panupong “Mike” Jadnok, one of the protesters being held at the Bangkok Remand Prison, wrote in a recent Facebook post he is terrified every time he hears the sound of clinking keys.

“It’s like the Grim Reaper has arrived to take someone’s life. We are so scared. We hope someone will help release us from this terrifying place,” read his message, which was posted on the United Front of Thammasat and Demonstration group’s Facebook page on Tuesday (March 23).

Fellow detainee Arnon Nampa, a human-rights lawyer and one of seven protest leaders being detained at the Bangkok Remand Prison, wrote that officials had shown up at their cell late at night to take some protesters away.

Arnon said in his handwritten note that prison officials visited their cell four times on the night of March 15 – at 9.30pm, just before and after midnight, and then again at around 2.30am. The officials stated that they wanted to take the detainees for COVID-19 tests, but the timing was highly irregular, Arnon said.

“It’s unusual to pull detainees out of their prison cells after midnight. It is rumoured that people were sent to take our lives inside the prison. We stayed up all night for fear. Please save us,” his letter read.

Arnon’s complaint triggered Criminal Court hearings on March 17 and March 22, during which he and two other protest leaders gave their testimony. The court is scheduled to issue a ruling on the complaint on Monday (March 29).

In his March 17 testimony, Arnon and his fellow protest leaders called for tighter security measures because they were afraid for their lives, his lawyer said. Arnon also reminded the court of the “many cases” in which detainees had died on remand while waiting for trial.

On March 22, Panupong told the court that he refused to take a swab test because he was afraid of being drugged. He said different detainees in the same cell were removed after they agreed to undergo COVID-19 tests.

“There were only seven of us left, and we were all terrified,” he said.

Another detained protest leader told the court that he also refused the test out of fear.

“A fellow detainee had told me that inmates were taken out of their cells at night and assaulted,” said Jatupat “Pai Daodin” Boonpattararaksa. “Some had injuries when they returned, while others were not seen again.”

The court rejected bail requests for the seven protest leaders on grounds they had repeated the behaviour that led to their arrest and would do so again if released.

Rejecting the claims of mistreatment, Department of Corrections deputy director-general Dr Weerakit Hanparipan insisted that prison officials always complied with regulations and would not take action without authorisation.

“Also, prison officials know that physically assaulting a prisoner is a criminal offence,” he added.

Weerakit said COVID-19 tests were required for new detainees as part of the department’s policy of strict screening, which he credited for keeping the prison free of infections.

“This is the first time that detainees have refused to take COVID-19 tests,” he said.

He added that it was not unusual to conduct tests at night, especially when new detainees came from high-risk areas. Three of the protest leaders were moved from the Thonburi Remand Prison, which is close to Bangkok’s Bang Khae district, a COVID-19 hotspot.

Meanwhile, senior government figures have ordered steps to ensure prisoners are not mistreated.

Prime Minister Prayut Chan-o-cha has ordered the installation of more security cameras in prisons to monitor not just detainees but also officials. He said the cameras may also help to determine whether any injuries are “self-inflicted”.

Justice Minister Somsak Thepsutin said he has ordered the Department of Corrections to relax its regulation banning the release of detainees’ photos or clips. This may help “end the fuss” over inmates in the public eye, he said.

All of a sudden, it’s halfway through. Amid a reigning political chaos, it’s easy not to notice that Thais are now as close to the next general election as they are to the last one. 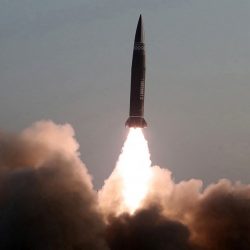 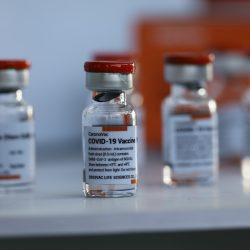