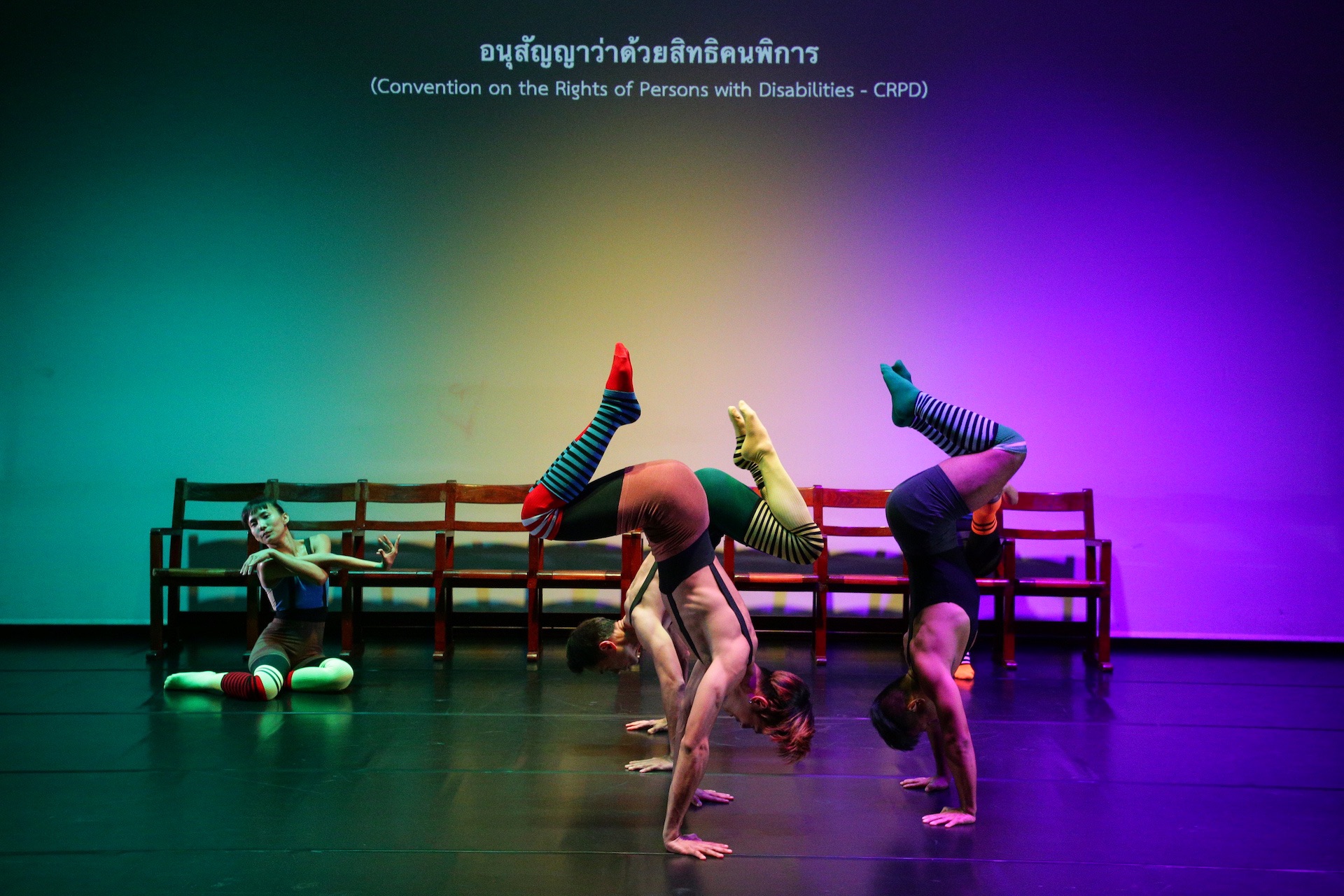 Pichet Klunchun and his troupe of dancers treated their audience to a visual feast on Monday, December 7, majestically capturing the messages of seven core human rights treaties in his performance titled simply “7” to mark the 70th anniversary of the adoption of the Universal Declaration of Human Rights by the United Nations.

For those who are fairly new to these human rights conventions, Pichet and his team, which included his daughter, communicated powerful messages to remind the audience that outside the Alliance Française Bangkok auditorium, there are still far too many people – women, children, the homeless, the disabled, the marginalized and those seeking political change – who are struggling to access their everyday rights and freedom.

Hard-core fans of Pichet who are more accustomed to the less interpretative, more intuitive artistic language of the dance for which he is renowned, might have felt slightly let down, as “7”, which correlates with the seven international human rights conventions that Thailand has ratified, left little room for the imagination. 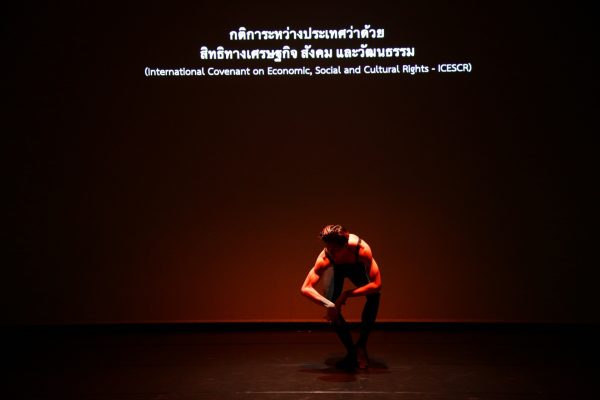 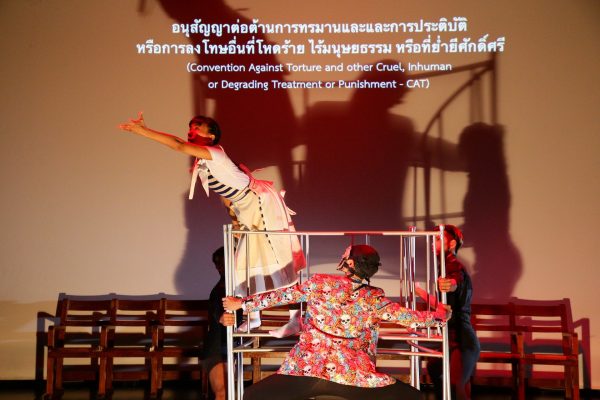 Pichet himself admitted in an earlier interview that the task of talking about each of the seven major treaties in a one-hour performance was nearly impossible, considering that a contemporary dance performance by its nature is not about telling a story but more a journey to broaden one’s experience.

Nevertheless, the master, himself a human rights advocate and critic of social and cultural issues, conveyed strong statements on Monday night through the symbols of birds, a cage, a hoop and stripes to convey diversity, freedom, constraints and the basic rights and freedoms to which we are all entitled.

In one early scene, birds of several hues were used to represent indigenous rights only for the audience to witness them being dispersed and ripped apart, then left lying motionless on the floor. The exception was one white bird, which was captured then locked in a cage perched high in a far corner of the stage by a man in an intricate costume, his head in a cage topped by a fiery red tier-inspired umbrella.

Later, in an emotional scene depicting the Convention on the Rights of the Child, a little girl came out, wandered around the stage, went to a corner, saw the bird in a cage, lowered it and took it out. She spent the rest of the scene gently caressing the bird while painting it with red hues from a box she had with her. Does it take children to give us back the freedom we so long for? 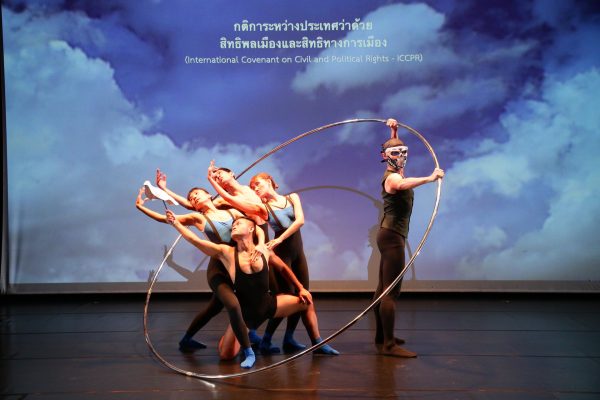 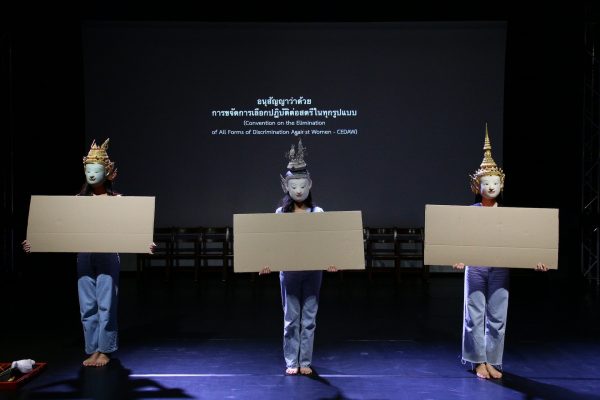 Appearing in the fifth scene to illuminate the Convention on the Rights of Persons with Disabilities, Pichet, though motionless to depict the disabled, was every inch alive and buzzing with energy. The way he stood, the way his hands, legs, head and torso were choreographed to express the disability was breathtaking. In that moment, the language of the disabled body he intuitively portrayed shone out in all its beauty.

The scene highlighting the Convention on the Elimination of All Forms of Discrimination Against Women (CEDAW) was thought-provoking, sarcastic, yet contemporary and comical. Three female dancers wearing Khon masks but dressed in jeans and t-shirts representing Sita, Benjakai and Sammanakka in Ramayana came out to petition for their removal from the Indian epic. They held signs, one saying she was jailed by a husband who loved her while another spoke of rape and the third had her tongue and ears cut. They quietly left the scene after removing their masks, revealing the faces of young beautiful girls. Symbolic maybe, but in the mind they could be replaced by LGBTQ or anyone of diverse gender or sexual orientation! 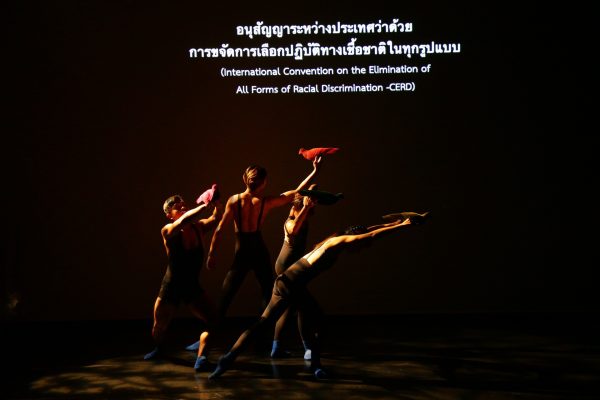 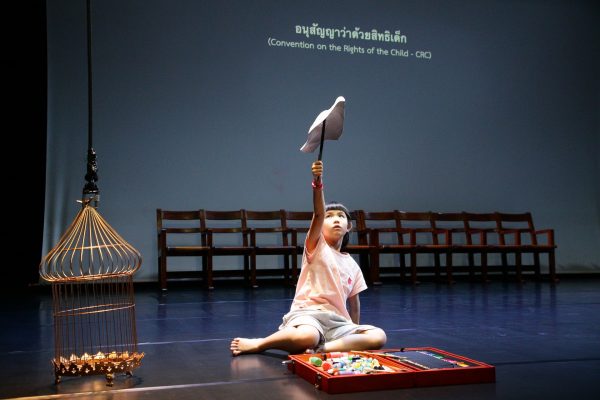 With its bullet sound-like music and cage, the final scene that touched upon the Convention Against Torture and Other Cruel, Inhumane and Degrading Treatment or Punishment portrayed the chaos of forced disappearance where freedom was violently deprived. The performance ended when the man wearing a cage topped by a fiery red tier-inspired umbrella reappeared and confronted the same child holding the white bird and red painted feathers in her hand. The man tried to snatch the bird but seconds before the entire stage went dark, we could see that the bird remained in the young girl’s hand. There remains hope after all.

At the same time “7” was being performed inside the theatre, protesters in the youth movement reported to the police to hear charges brought against them under Section 112 of the Criminal Code known as the lese majeste law before being released on bail. While Pichet said in the opening video that we are entitled to the rights and freedom to expression, the sad reality is that only some of us actually have them. 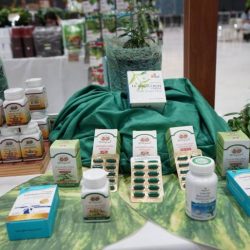 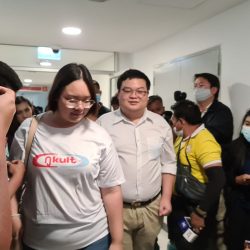