Many netizens took to Twitter to complain about Bangkok Bank’s mobile application, which had been down “due to current high volume of access” since early this morning (Thursday), the day many people’s salaries are transferred into their accounts, making the hashtags, translated as “Bangkok is down” and “Bangkok Bank”, top trending on Twitter.

Many netizens ranted that the mobile app had been inaccessible since 5am. At the time of this report, the app remained inaccessible for many, with several complaining about not being able complete any transactions or even transfer money to their families.

Netizens even poked fun at a female cartoon character, which is seen bowing to customers on the banking app, along with the service-is-unavailable message. 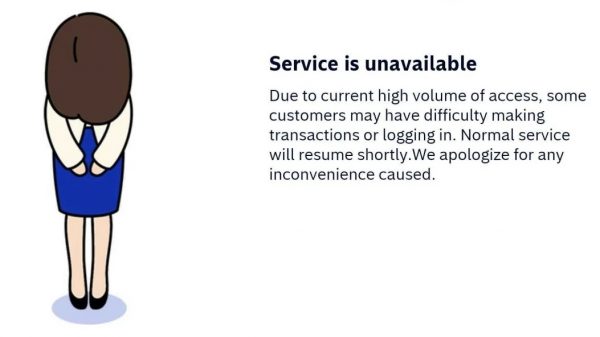 One of the netizens tweeted “That’s funny, hiring staff to create this cartoon instead of hiring them to improve the app!” The same user also tweeted that the bank’s main weakness is technology, with the mobile app crashing nearly every month.

Another user suggested that the Bank of Thailand should come up with measures to regulate mobile banking apps, and that banks responsible for the crash should pay a fine and compensate their customers.

Meanwhile, Bangkok Bank issued a statement, explaining that their mobile banking service is temporarily unavailable as they are experiencing technical issues, adding that the bank acknowledges the problem and will fix it as soon as possible.