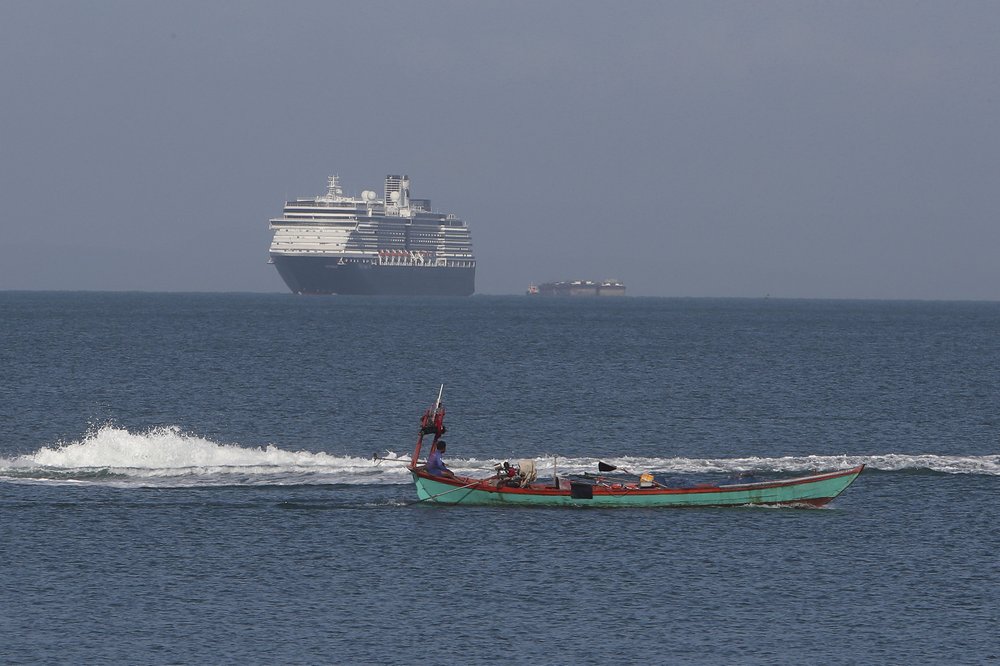 The MS Westerdam, owned by Holland America Line, sails off a port of Sihanoukville, Cambodia, Thursday, Feb. 13, 2020. Holland America Line said the ship has been turned away by the Philippines, Taiwan, Japan and Thailand, though its operator said no cases of the disease have been confirmed among the more than 2,200 passengers and crew. (AP Photo/Heng Sinith)

SIHANOUKVILLE, Cambodia (AP) — A cruise ship turned away by other Asian and Pacific governments due to virus fears anchored Thursday off Cambodia, which is checking the health of its 2,200 passengers and crew.

The Westerdam was unwelcome elsewhere even though operator Holland America Line said no cases of the COVID-19 viral illness have been confirmed among the 1,455 passengers and 802 crew members on board.

The ship is anchored a kilometer (.6 miles) from the main Sihanoukville port and a team of health officials will conduct health checks and determine the disembarkation process, Preah Sihanoukville Gov. Kouch Chamrouen told The Associated Press.

Some 20 passengers have reported stomachaches or fever, Cambodian health officials said. The ship’s health staff considered them to be normal illnesses, but the ill passengers were being isolated from others, health ministry spokeswoman Or Vandine said.

She said if tests show any passengers have the disease, they’ll be allowed to get treatment in the country.

U.S. Ambassador W. Patrick Murphy said he sent an embassy team to work with the ship’s representatives and Cambodian officials to help Americans disembark and transfer to their onward destinations.

“We have also coordinated with foreign embassies of other nationalities,” he wrote on Twitter.

Thailand refused to allow the Westerdam to dock this week after it had already been turned away by the Philippines, Taiwan, Japan and Guam.

The Westerdam’s cruise will end in Sihanoukville and passengers can take charter flights to the Cambodian capital, Phnom Penh, to return home, Holland America said.

“All approvals have been received and we are extremely grateful to the Cambodian authorities for their support,” the statement on the cruise operator’s website said. The ship’s request to remain in Cambodia was approved through next Monday.

The Westerdam began its cruise in Singapore last month and its last stop before it was refused further landings was in Hong Kong, where 50 cases of the viral disease have been confirmed.

COVID-19 has sickened tens of thousands of people in China since December, and more than 170 cases have been confirmed on another cruise ship, the Diamond Princess, which made stops in Hong Kong and other ports before arriving in Japan last week.

World Health Organization Director-General Tedros Adhanom Ghebreyesus said earlier he was pleased Cambodia had agreed to accept the Westerdam and described it as an example of the international solidarity advocated by the U.N. health agency.

Cambodian Prime Minister Hun Sen is a strong ally of China and has played down any threat from the new coronavirus in his country. He had declined to ban direct flights to China, a step taken by other governments and airlines. Cambodia has confirmed just one case of the virus, in a Chinese visitor.

A passenger on the Westerdam expressed relief at the news the ship would be docking in Cambodia.

“Homeward bound! The #Westerdam is headed for Cambodia,” she tweeted. “We’re told by the captain that it may take a few days to get everyone on chartered flights to Phnom Penh and then home. Elated at the prospect of touching land tomorrow. Until then, I’ll work on my towel animals.” 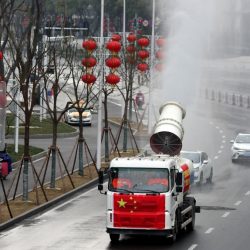 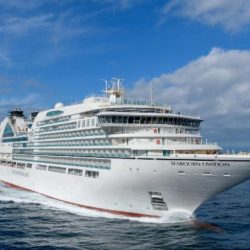