The Criminal Court today granted bail for an anti-government protester who has been charged with committing an act against the liberty of HM the Queen, in accordance with Section 110 of the Thai Criminal Code, while a royal motorcade passed near Government House on Thursday.

A political science student at Mahidol University, he surrendered to Dusit district police, to acknowledge the charge, which carries penalties ranging from 16 years to life in prison on conviction.

He told media, after his surrender, that he did so voluntarily because he is innocent and had no intention of infringing upon the liberty of HM the Queen. He claimed that he was not aware in advance of the arrival of the motorcade and that he had tried to move further away.

His mother posted the 200,000 baht bail and the court agreed to release him, on the grounds that he has a permanent residence and is not likely to escape. The court, however, set a condition that he must not repeat the same offence.

Another suspect, charged with the same offence, was remanded to Bangkok Special Prison today, pending further police investigation, after no one offered bail. He is a political activist who was arrested at his house in the Lat Phrao area yesterday.

In the meantime, the Criminal Court rejected bail for a Red-Shirt follower, because the court has reason to believe that he might commit a similar offence if he were to be released.  He was remanded to Bangkok Special Prison. He is charged with illegal assembly, for leading a group of people to install the Khana Ratsadon plaque at Sanam Luang on September 20th.

Pol Col Thavee Sodsong, a party-list MP for the opposition Prachachart Party, used his parliamentary status to try to provide bail for the suspect, but the court rejected the request on the recommendation of the police. 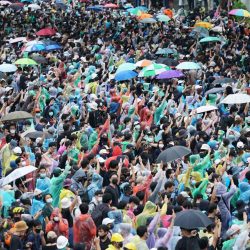