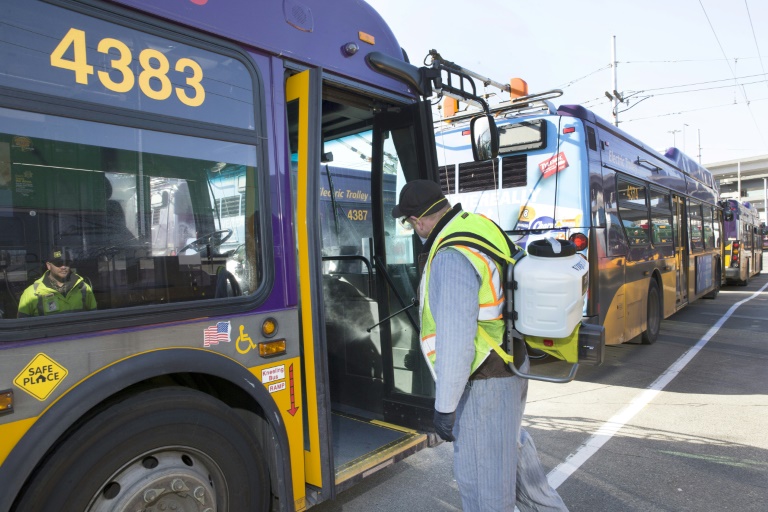 An equipment service worker for King County Metro sprays a disinfectant, throughout a metro bus in Seattle, Washington, a new focal point for the coronavirus epidemic

Tech firms in Seattle, a new focal point for the coronavirus epidemic, were telling employees this week to take advantage of technology to work remotely in an effort to contain the outbreak.

Ten of the 12 US fatalities from the outbreak have been in the northwest state, leading to an emergency declaration by the state and proactive measures in the community where tech plays a major role in the economy.

Online retail and cloud computing colossus Amazon, which has transformed the northwestern US city with its urban campus, has given its more than 50,000 employees in the region a green light to work remotely.

“We are recommending that employees in Seattle/Bellevue who are able to work from home do so through the end of the month,” Amazon told AFP.

Facebook and Google, which have been steadily expanding operations in Seattle, are also encouraging workers in the state of Washington to stay away from the office to reduce risks amid a global outbreak which has killed more than 3,000 people and led to closings of schools and factories in some countries.

Microsoft, with headquarters in Redmond, a short distance from Seattle, put out word to employees this week that if possible, they should work from their residence for the next couple of weeks.

People considered more vulnerable to succumbing to COVID-19, such as those older than 60 years of age or with medical conditions, were told to arrange for time off if their jobs require them to go to the office, according to an online post by Microsoft.

“We are providing real-time guidance to employees in all affected regions,” the company told AFP.

“We continue to monitor the situation and take action as necessary to help protect employees.”

Amazon this week confirmed that an employee in Seattle had been quarantined after testing positive for the new coronavirus.

Workers known to have been in close contact with the ill employee were notified.

Coronavirus deaths at a nursing home in the Seattle suburbs have heightened concerns in the area, where aerospace giant Boeing has major operations.

Boeing told AFP that its facilities in that area remain open, and there has been no crimp to airplane production.

Boeing sent out word to workers late Wednesday that someone who works on a 777 aircraft production line went home ill with flu-like symptoms.

As a precaution, Boeing sent home other workers who were part of the sick employee’s team, according to the message.

“So far, we have not had any confirmed cases of coronavirus at Boeing,” the message to Boeing workers read.

Tech firms have also been taking precautions closer to home in Silicon Valley.

Lyft said it encouraged its San Francisco staff to work from home for the remainder of the week after it learned one of its employees was in contact with someone who was exposed to COVID-19.

“The team member has not exhibited any symptoms, and is in touch with medical professionals,” Lyft said in a response to an AFP inquiry.

“We are basing every step of our response process on CDC guidance, and out of an abundance of caution are encouraging our San Francisco headquarters employees to work from home.”

The Lyft headquarters in San Francisco, which remains open, was to undergo a deep-clean..

Twitter staff across the world were asked to work from home starting early this week in an effort to stop the spread of the deadly new coronavirus epidemic.

Meanwhile, Silicon Valley titans have taken to conducting job interviews remotely instead of in person due to virus spread concerns, according to media reports. 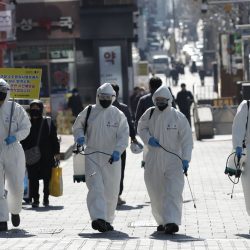