Chuvit Kamolwisit, an outspoken television show host and former politician, was released from the Bangkok Remand Prison this morning after completing a one-month jail term handed down by the Supreme Court’s Criminal Division for Holders of Political Positions.

He was found guilty of filing a false assets declaration to the National Anti-Corruption Commission after the end of his term as an MP.

Chuvit was greeted by members of his family on being released at 7am.  He said that during the one month in jail, from June 21 to July 20, he met all of the former senior monks who have been charged in connection with the embezzlement of temple funds as well as the former Phra Buddha Isara, the former abbot of Wat Or Noy in Nakhon Pathom.

It was his third time in jail and Chuvit likened it to a study tour.  While in prison, he had no health problems. Instead, he claimed he has become healthier because of his regular meals and exercise.

He thanked the Corrections Department chief and officials concerned for taking a good care of him.

Chuvit said he will talk about his plan for the future on Monday, including about his role as a television show hosts at Channel 3 and Thai Rath TV. 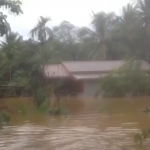