The continuing questioning of the efficacy of the Chinese-made Sinovac Covid-19 vaccine has drawn the ire of China whose Embassy in Bangkok said it hurts China’s goodwill to help Thailand’s fight against the pandemic, triggering a heated debate on the social media.

The Embassy of the People’s Republic of China over the weekend issued a statement on its Facebook to refute persistent claims by critics of the Prayut government that the Chinese vaccine is not effective against the virus.   Similar claims were repeated by many of the opposition MPs during the no-confidence debate in the House of Representatives against Prime Minister Prayut Chan-o-cha and Public Health Minister Anutin Charnvirakul last week.

It said the vaccine has been approved by the World Health Organization for emergency use and approved by Thailand’s Food and Drug Administration.  It also pointed out that studies by public health agencies in Chile and Indonesia showed that Sinovac was 86 per cent and 95 per cent effective respectively in dealing with mutated variants of the virus, “which proves it’s not low-quality vaccine as alleged.”

During the House debate, House Speaker Chuan Leekpai had to intervene to remind opposition MPs speaking on the issue of the Chinese vaccine to avoid remarks that could affect the two countries’ relationship.   Foreign Minister Don Pramudwinai yesterday also expressed concerns over what he described as false information to mislead the public about the vaccine.

The Chinese Embassy said in the statement that it is vehemently opposed to any attempts to devalue the vaccine and urged the critics “to stop this gross offence.”

“Recently some people and organizations in Thailand have belittled and made groundless charges against the Chinese vaccine without any scientific proof. This has hurt China’s goodwill to support Thai people’s efforts to fight the pandemic,” it said.

The statement triggered a wave of comments on the social media.  Many thanked China for its donations of the vaccine and apologized on behalf of the Thai people for the criticisms over its efficacy. However, some reacted strongly to the statement and continued to question the efficacy of the vaccine. 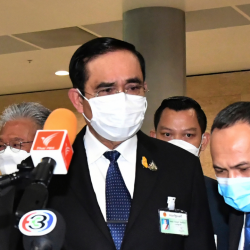