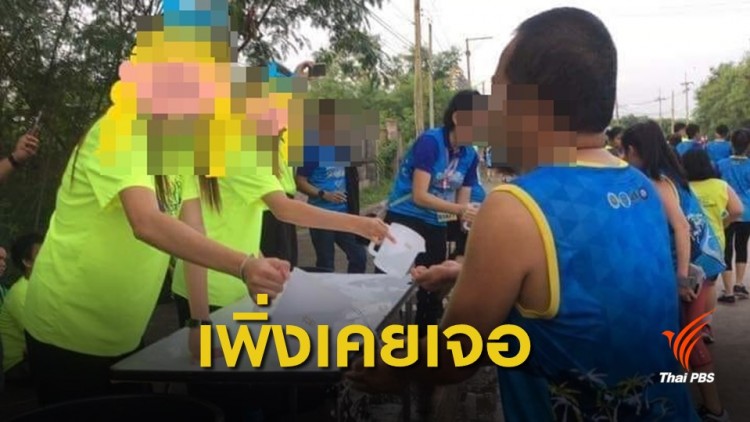 The charity Chon Buri marathon 2018 held on October 14 in the eastern seaboard province of Chon Buri has become the talk of the town – in a bad way though.

Images of several thirsty runners sipping water dripping from ice cubs and drinking water poured onto their hands from jugs by event officials because there were no paper cups or bottled drinking water were something unimaginable for marathoners.

The running route was not in the middle of a desert although it was a bit out of town.  But there should not have been any problem of getting additional drinking water supply from the town when it was found out that drinking water had completely run out.

But nothing was done and the best thing that the organizers did was to inform the runners that there was no drinking water for them.  Several runners just walked out before finishing because they were too thirsty.

One runner, Siwadon Toffy Sambathhasib, wrote in his Facebook page that he was very angry to learn that one of the organizers said he didn’t expect so many runners to participate in the event and asked for an apology.

“How come?” he questioned, saying that every runner paid for the event and was given a T-shirt, so the organizers should have known how many runners took part in the marathon.

The marathon runs were divided into 42-km full marathon, half marathon of 21 kms and 5-km.  The event started s3.30 am for the full marathon.

Siwadon said there were no shops along the running route.  He ran for five kilometres and found out that there was no water for the runners so he stopped running and walked back to the starting point.

He said the announcer told the runners to drink a lot of water before running because there was no water throughout the route.

The charity run was jointly organized by the Burapha University Hospital, the King Rama IX Suan Luang walking-running club of Chon Buri, the Lions Club of Chon Buri and Bang Saen and the Chon Buri Sports Association to raise fund for the hospital.

Another runner, Poon Kub, who joined the full marathon run, had to pull out after having covered more than half of the distance.  But after the 13-km mark, he was told by officials that there was no water, but he struggled on hoping that there would be water in the next stop but, again, no water.

Poon Kub said after about 23 kms he asked for water from a construction worker who kindly gave him water from her water canteen.

He suffered cramps in the stomach and legs which forced him to stop.  An ambulance was called in to take him to Samitivej hospital in Chon Buri where he was rushed to the ICU after his kidney reading was 2.4 against the normal level of 0.5.

Doctors feared that he might suffer from sudden kidney failure.

He said after his discharge from the hospital that he would like the organizers of such a sports event to be more concerned with the safety of the runners.

Dr Suriya Prongnamjai, director of the Burapha University Hospital, asked for an apology for the poor management, but said the organizers were overburdened and could not properly take care of all runners.

However, he said he would like the public to view the organizers in a positive light for wanting to save more money for donation to the hospital.