The 31 candidates vying for the Bangkok governor’s post now have less than 50 days to impress the voters. But after examining their policies and campaigns, political observers believe they can separate the top contenders from the flops.

According to the analysts, all the candidates share similar policies to address Bangkok’s long-standing problems of flooding, traffic congestion, quality of life, and pollution. Yet some aspirants stand out thanks to their presentation techniques and practical plans to implement their ideas.

Who has the ‘wow factor’?

Dr. Stithorn Thananithichot, director of Innovation for Democracy under the King Prajadhipok Institute, pointed to independent candidate Chadchart Sittipunt as the first candidate who stood out from the rest.

Instead of spotlighting big policies, Chadchart has presented 200 small ideas to fill the gaps and deliver tangible results given that all key city infrastructure is already in place. According to him, Bangkok just needs to link up services and infrastructure to boost efficiency and people’s life quality.

His low-key campaign has also won praise from voters.

“Compared to other big-name contenders, Chadchart does not have many billboards,” Stithorn pointed out. “When people noticed this, he explained that he had done this deliberately because he wants to minimize waste. He has also decided to go with reusable vinyl banners.”

To further promote his green agenda, Chadchart is using electric vehicles in his campaign caravans.

Chadchart had, for instance, declared that he will not hesitate to revoke permits of polluting construction firms to meet his pledge to combat PM2.5 dust. He also said that more sensors measuring PM2.5 dust in the air will be installed around the capital, and authorities will hand out protective gear to vulnerable residents.

“His presentation has assured the public that these are not empty promises, as he explains how his policies will deliver the intended results,” Sonthi said.

Meanwhile, Chadchart has vowed to tackle Bangkok’s shortage of green space if elected, promising that pocket parks will mushroom across the city so that greenery is available to everyone within a 15-minute walk.

“He said he will also offer tax incentives to wealthy landowners who agree to transform their empty plots into parks,” Sonthi said.

Who could be a flop?

Though Democrat candidate Prof Dr. Suchatvee Suwansawat remains a strong contender, his popularity seems to be fading after a good start to the campaign, Stithorn said.

“He had a grand opening in the beginning. Citing his strength as a capable engineer, he showcased his ideas for infrastructure projects. However, that failed to impress,” Stithorn said. He now believes that Suchatvee’s chances of winning the gubernatorial election are low.

Sonthi said that while Suchatvee had tried to scale down his grand policies and talk more with voters, he has had difficulty connecting with them. “Though he has walked around markets, he still seems to know too little about what people need,” the analyst commented.

Aswin served Bangkok for the past eight years – first as deputy governor and then as governor. However, this former senior police officer has never contested a gubernatorial election before.

He landed the much-coveted job through a special appointment by the junta leader in October 2016. Though his policies do not stand out, he enjoys certain advantages. Many city voters and Bangkok Metropolitan Administration officials will support him because he is a familiar face. However, he is unlikely to appeal to the younger generation.

Sharing Aswin’s lack of outstanding policies is his former right-hand man, Sakoltee. However, he looks set to do well during policy debates thanks to his experience as deputy governor.

Rosana, who aspires to be a “female butler” for the city, has called on Bangkokians to vote in a woman for a change and see the difference made by a woman’s caring and more cautious nature. Bangkok has never had a female governor.

Rosana’s policies are strong, says Sonthi, before adding that she does not have a solid enough team behind her.

Wiroj, meanwhile, has been trading on his charismatic character and vows to “tackle all challenges head-on for Bangkok people”. The top targets in his headlight are bribe-taking city officials and monopolistic business practices.

Former government spokesman Sita Divari of the Thai Sang Thai political party announced his candidacy for the gubernatorial race late, so his policies are less well known. His campaign focuses on 3Ps – people, profit, and planet.

Stithorn reckons all candidates will adjust their policies constantly to get ahead in the final sprint to the finish line. Though their basic ideas are already familiar to the public, they can still fine-tune them to woo voters in the run-up to the May 22 election.

“I think voters will see their best presentations in the last week of the campaign,” Stithorn said.

Sumet Ongkittikul, research director for transportation and logistics policy at the Thailand Development Research Institute (TDRI), said candidates should not just present their ideas but also show how they will translate into action.

“We have heard about feeder development and linked-up ticketing for Bangkok’s public transport system for more than 10 years now. Candidates in previous gubernatorial elections talked plenty about such policies. So, it’s high time for candidates to not just talk about ‘good policies’ but also explain how they will be implemented,” Sumet said.

He is keen to see key gubernatorial candidates join policy debates so voters can determine which ones will be able to deliver concrete results.

“Monitor the successful candidate and push them into action,” Tavida said.

Drunk drivers could face jail time without suspension during Songkran 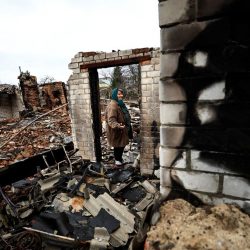