Civil society in Thailand’s north-eastern province of Mukdahan is demanding a reinvestigation of the Muang district municipality’s expenditure of about 29 million baht on five projects, related to the improvement of the landscape and the construction of a weir in the municipal area.

The projects, which were implemented in 2016, include the installation of about 100 “fancy” lamp posts, featuring the Naga serpentine figurine mounted on top of the posts, close to the Sila Wiwek monastery.

The petitioners claim that the lamp posts have not remained in working condition after they were installed and the nearby weir and a concrete road running parallel to a stream havefallen into disrepair.

The provincial office of the National Anti-Corruption Commission (NACC) conducted an investigation into the fiveprojects and did not find any evidence of corruption.

The provincial corruption watchdog, however, observed that the projects have not been properly maintained, due to no maintenance budget being allocated, and the areas where the weir and the lamp posts are located have not yet been transferred to the care of the municipality. The projects are part of the Muang district municipal administration’s plan to improve the landscape, to promote tourism in the province.

Similar “fancy” lamp posts have been found installed in many provinces, particularly in municipal areas. Most were, however, installed on deserted secondary roads or, in some cases, in the middle of empty land with no road access.

Several “fancy” lamp post projects are either under investigation for alleged corruption by the NACC or the Office of the Auditor-General. 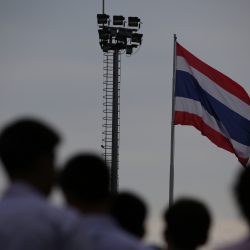 Bangkok administration urged to manage its own educational system