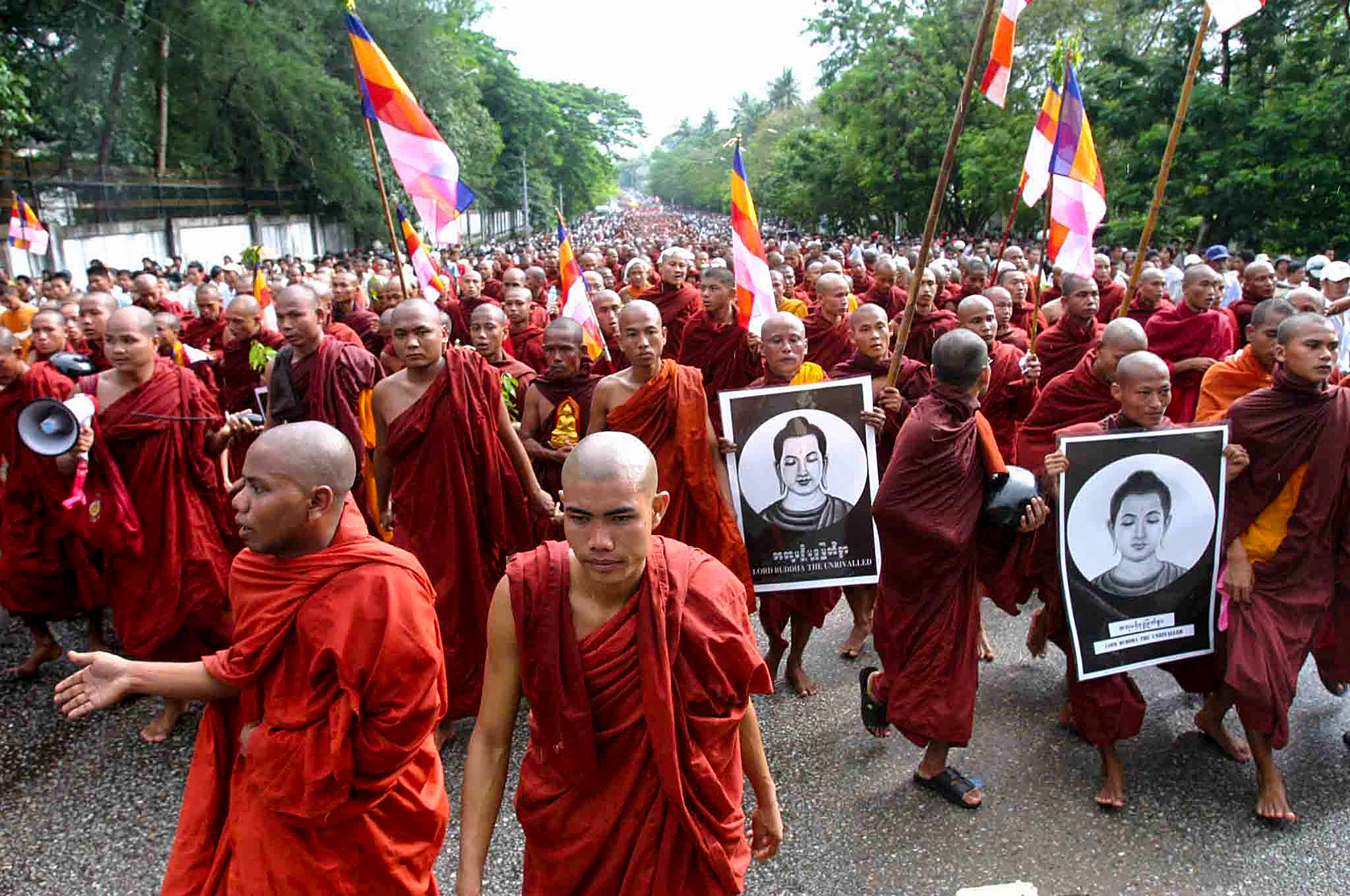 (FILES) In this file photo taken on September 24, 2007, Buddhist monks march in protest in Yangon / AFP

Myanmar’s Buddhist monkhood led an earlier struggle against military rule but is split on the coup that ended the country’s nascent democracy, with some prominent religious leaders defending the new junta.

Protesters have mobilised on the streets daily ever since, defying threats of lethal violence from security forces who have shot dead hundreds in an effort to bring the public to heel.

Joining their ranks are a number of largely young, crimson-robed monks who have defied religious edicts against political activity to proclaim their condemnation of the generals.

“I am willing to give up my precious monkhood and take part in the revolution together with the people,” said Shwe Ohh Sayardaw, 44, who is currently moving between different monasteries in an effort to evade arrest.

The struggle against the military regime has drawn broad and vocal support from across Myanmar society and, with Buddhist worship a cornerstone of public life for most of the country, the monkhood is no exception.

Security forces are closely watching monasteries for anti-coup activism, and about a dozen monks have been arrested, according to a local monitoring group.

But a hardline, pro-military faction within the clergy has also defended the new junta as a protector of a majority-Buddhist identity against the purported threat of a slow Islamic takeover.

Among that group is Parmaukkha, an ultra-nationalist monk with a large following who was once arrested for inciting hatred against Myanmar’s stateless Rohingya Muslim minority.

Keeping Suu Kyi at the helm would see “an extinction of our religion, ethnicity and the entire country”, he said.

The ideological divide is a far cry from Myanmar’s last nationwide uprising in 2007, when monks led huge demonstrations against an earlier military junta, first sparked by a sudden hike in fuel prices.

Members of the clergy walked the streets with their alms bowls turned upside-down to show their refusal to accept donations from soldiers — a bold gesture of condemnation.

The “Saffron Revolution” posed a severe legitimacy crisis for the dictatorship, which responded with brutal crackdowns that killed at least 31 people and saw hundreds of monks defrocked and arrested.

Among those arrested was Gambira, a prominent leader sentenced to 68 years in prison for his activism.

When he was released in a mass amnesty in 2012, he found a fractured clergy.

“Many have been killed or are missing, others imprisoned for years are in poor physical condition. Many have fled abroad,” said the 41-year-old, who today lives in Australia as a refugee.

At the same time, a nationalist movement named Ma Ba Tha emerged within the clergy alongside the growing prominence of a charismatic extremist monk named Wirathu — once dubbed “the Buddhist bin Laden” by Time magazine.

His rhetoric and his followers’ hostility towards the Rohingya helped whip up public support for a brutal 2017 military crackdown, branded a “genocide” by UN investigators.

Ma Ba Tha was banned in 2017 by Suu Kyi’s government in an effort to curb its influence but the group continued to receive patronage and cash donations from military figures.

The movement believes that the military is the only force capable of staving off what they claim is a growing “Islamisation” of Myanmar — despite Muslims making up less than five percent of the country’s population.

“People who can think ahead about that future will not protest the current government,” says Parmaukkha in defending the military’s power grab.

Security forces have killed at least 780 civilians, according to a local monitoring group, in a series of brutal crackdowns aimed at quelling opposition to the coup.

But Parmaukkha blames the growing death toll on the streets on the media for inciting opposition to military rule.

Shwe Ohh Sayardaw disagrees, blaming it instead on a military that has “unjustly seized power”.

“The current crisis is the result of peaceful demonstrations, a normal process in a democracy,” the monk says.

“We must stand on the side of justice.”

The code of monastic life prohibits some 300,000 monks from voting or taking part in political demonstrations.

But from exile in Australia, Gambira says those rules only apply “in an ideal world”.

“Our country has fallen into chaos. We cannot close our eyes.”

Even after renouncing the monkhood, Gambira fundraises for the protest movement.

“The Buddha taught us that, no matter where or how, we must always stay on the path of truth,” he says.

“We have only one motto now: never surrender.” 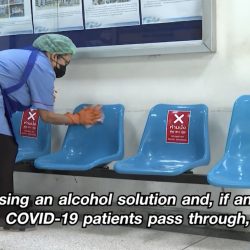 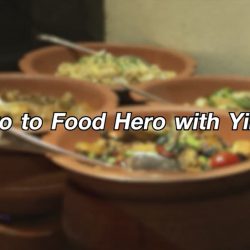