Biden pays tribute to queen as ‘stateswoman of unmatched dignity’ 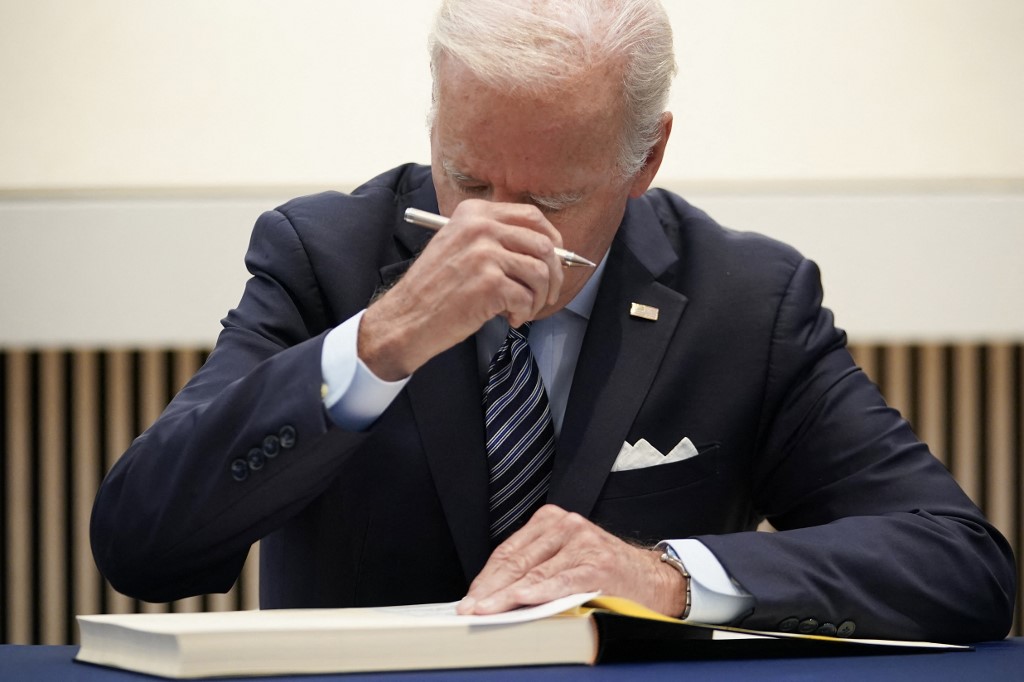 US President Joe Biden signs the condolence book at the British Embassy in Washington to pay his respects following the death of Britains Queen Elizabeth II in Washington, DC on September 8, 2022. (Photo by Mandel NGAN / AFP)

(AFP) – US President Joe Biden paid tribute Thursday to the late Queen Elizabeth II as a “stateswoman of unmatched dignity,” and said he looked forward to working with her son King Charles, noting their already “close friendship.”

Biden ordered flags at the White House and other federal buildings to be lowered to half-staff, and also visited the British embassy in Washington to sign a condolence book for the queen.

“Queen Elizabeth II was a stateswoman of unmatched dignity and constancy who deepened the bedrock alliance between the United Kingdom and the United States,” Biden and First Lady Jill Biden said in a statement. “She helped make our relationship special.”

At the embassy, Biden told staff the late queen was “a great lady” and that he was “so delighted I got to meet her.”

Biden, 79, noted deep ties between the monarch and the United States, a former British colony.

“She stood in solidarity with the United States during our darkest days after 9/11, when she poignantly reminded us that ‘Grief is the price we pay for love,'” Biden said in his statement.

Setting aside their political divisions, now as deep as ever in America, the former US leaders were unanimous in their respect for the queen, praising her historic legacy as well as her personal traits.

Obama hailed “a reign defined by grace, elegance, and a tireless work ethic, defying the odds and expectations placed on women of her generation.”

“She listened deeply, thought strategically and was responsible for considerable diplomatic successes,” he said in a statement.

Trump said the queen left an “extraordinary legacy of peace and prosperity for Great Britain.”

“Her leadership and enduring diplomacy secured and advanced alliances with the United States and countries around the world,” Trump said on his social network, Truth Social.

The Clintons remembered the queen for “the kindness she showed us,” while the Bushes noted that “tea with Her Majesty — and her Corgis — is among our fondest memories of the presidency.”

Biden said he first met the queen in 1982 when he was a US senator and last saw her in June 2021 during his first foreign trip as president — the 14th American president she had met.

“She was the first British monarch to whom people all around the world could feel a personal and immediate connection,” the Bidens said. “She, in turn, dedicated her whole life to their service.”

“In the years ahead, we look forward to continuing a close friendship with the king and the queen consort,” they said, referring to Elizabeth’s son and heir King Charles and his wife.

“Today, the thoughts and prayers of people all across the United States are with the people of the United Kingdom and the Commonwealth in their grief.”

Flags will also be lowered on US Navy vessels, at military posts and naval stations, and at all American embassies and other facilities abroad, a proclamation from the White House said.

Canadian Prime Minister Justin Trudeau paid a tearful tribute Thursday to Queen Elizabeth II, whom he first met as a child and admired personally, saying she will “forever remain an important part” of his country’s history.

“She was our queen for almost half of Canada’s existence. And she had an obvious, deep and abiding love and affection for Canadians,” he told a news conference, speaking of the monarch who also served as Commonwealth member Canada’s head of state.

“She served us all with strength and wisdom for 70 years,” he added, his eyes filling with tears as he disclosed: “I’m having trouble believing that my last sit down with her (as prime minister) was my last.”

“I will miss those chats,” he added.

Trudeau first met the queen when he was a boy and his father, Pierre Trudeau, was prime minister in the 1970s.

“She was one of my favorite people in the world,” he said. “And I will miss her so…. She was thoughtful, wise, curious, helpful, funny and so much more.”

“In a complicated world, her steady grace and resolve brought comfort and strength to us all. Canada is in mourning,” he said.

Queen Elizabeth had visited Canada a total of 22 times, more than any other country.

During her last visit in June 2020, the monarch told the crowd gathered in Halifax on Canada’s Atlantic coast: “It’s very good to be home!”

Opposition leader Candice Bergen echoed Trudeau’s sentiments, noting that Elizabeth “was not only a witness to our historical evolution as a modern, confident, and self-assured nation — she was an active participant.”

Bergen recalled the queen’s presence for a ceremony to open the St. Lawrence Seaway and later presiding over the opening of the Olympic Games in Montreal in 1976, as well as her endorsement of the repatriation of Canada’s Constitution from Britain.

Trudeau earlier said in a statement the queen “was a constant presence in our lives — and her service to Canadians will forever remain an important part of our country’s history.”

“Australian hearts go out to the people of the United Kingdom who mourn today, knowing they will feel they have lost part of what makes their nation whole,” Albanese said.

He praised “an historic reign and a long life devoted to duty, family, faith and service.”

Queen Elizabeth was the only reigning UK monarch to have visited Australia as head of state.

“It was clear Her Majesty held a special place in her heart for Australia,” said Albanese, recognising “the special place she held in ours.”

“Today marks the end of an era, the close of the second Elizabethan age.”

Australia was a British colony for more than 100 years. The country gained de facto independence in 1901, but has never become a fully fledged republic.

In 1999, Australians narrowly voted against removing the queen, amid a row over whether her replacement would be chosen by members of parliament, not the public.

Polls before Elizabeth II’s death showed most Australians in favour of becoming a republic, but there is little agreement on how a head of state should be chosen.

The issue has been rekindled since Albanese was elected prime minister earlier this year.

He quickly appointed the country’s first “minister of the republic” and suggested that another referendum could be held in the future.

India’s Prime Minister Narendra Modi said Thursday he was “pained” by the death of Britain’s Queen Elizabeth II, hailing the monarch of his country’s former colonial ruler as a paragon of “dignity and decency”.

The queen acceded to the throne in 1952 — the first British monarch in more than a century not to have also reigned as either emperor or empress of India.

Modi said she had provided “inspiring leadership to her nation and people” and offered his condolences to the royal family and British public.

During a meeting with the queen in Britain, she showed Modi a handkerchief given to her by Indian independence hero Mahatma Gandhi at her wedding.

“I will always cherish that gesture,” he wrote on Twitter.

“She personified dignity and decency in public life. Pained by her demise.”

Elizabeth II’s tenure as the United Kingdom’s longest-reigning sovereign began just five years after the independence of a country once referred to as the “jewel in the crown” of the British Empire.

By the end of it, the former colony’s GDP had just overtaken that of Britain, according to IMF figures, and it is set soon to become the world’s most populous nation.

Earlier Thursday, Modi unveiled a statue of Subhas Chandra Bose, an independence hero venerated for taking up arms against the British, but controversial for his collaboration with Nazi Germany’s war machine.

The image in New Delhi replaces a statue of Britain’s king George V — the queen’s grandfather — torn down nearly half a century ago.

Senior European diplomats in New Delhi say it is far easier for them to question Indian government actions than the British ambassador, from whom any criticism risks provoking a torrent of condemnation over the past.

“The death of the queen, who led Britain through turbulent times in the world, is a great loss not only for the British people but also the international community,” he told reporters.

Kishida praised the queen’s “extremely important role in world peace and stability,” saying she “contributed greatly to the strengthening of Japan-UK relations”.

News of her death, he added, left him “feeling deep sorrow”. 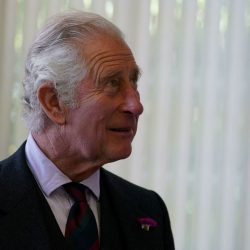 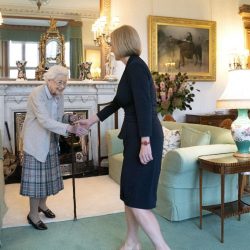