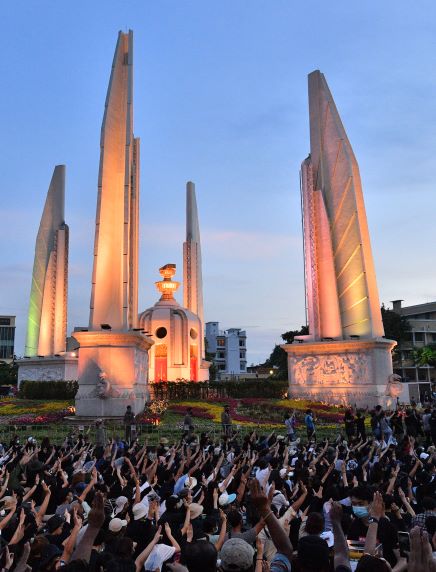 The fate of Thailand’s Constitution is hanging in the balance after Parliament last week failed to vote on whether it should be amended. Instead, lawmakers, mainly government MPs and senators, overwhelmingly voted to set up a committee to study charter amendment proposals – a move widely seen as a delaying tactic.

The move also disappointed the student-led anti-establishment movement, which has been holding protests for more than two months, calling for the current Constitution to be amended, the House dissolved and the monarchy to be reformed.

Critics say certain provisions in the 2017 Constitution, written by military appointees after the 2014 coup, are “undemocratic” and were designed to enable the post-coup junta National Council for Peace and Order (NCPO) to retain power after the March 2019 general elections.

Among the six motions, two proposed by government coalition parties and five opposition parties seek to amend Article 256 of the Constitution to pave the way for the setting up of a Constitution Drafting Assembly (CDA) to write a new charter.

In a positive sign for their proponents, Prime Minister Prayut Chan-o-cha on Tuesday reportedly asked coalition party leaders to support the two motions seeking the setting up of a CDA, provided it does not touch Chapter 1 on general provisions and Chapter 2 on the monarchy.

However, votes from government MPs will not be enough. For an amendment to pass, it also needs the okay from at least 84 of the 250 senators.

The new panel set up to study the six motions has 30 days or until October 23 before it has to submit its conclusion to Parliament when it reconvenes on November 1. The 31-member committee is made up of senators and government coalition MPs. The opposition refused to be part of it.

Three scenarios are seen for the study result. First, the panel suggests that some or all six of the motions are voted in. Second, it proposes all six are rejected. Third, it does not propose voting either way, but merely weighs the pros and cons of each motion. But no matter which scenario, each will require all 737 parliamentarians to cast votes on the motions in the chamber.

However, the process may be delayed if the panel seeks an extension of 15 or 30 days to further study the motions. It may also ask for a national referendum to see if the public agrees with the idea of redrafting a new charter before the Parliament votes to pass the motions. A public referendum can take 90 to 120 days.

After attending the panel’s first meeting on Wednesday, its deputy chairman Paiboon Nititawan said they discussed a previous Constitutional Court ruling that a national referendum is necessary before an existing charter is amended to allow redrafting of a new Constitution. He said a working panel may have to be set up to look into this issue.

A hurdle at every turn

The current Constitution was drafted with the aim of making changes next to impossible. Despite being approved by a national referendum, the 2017 Constitution puts forth several obstacles for any moves to revise it.

Under Article 256, at least half of both chambers or 369 votes are needed to pass a motion in the first reading and this must include at least one-third or 84 of the 250 senators. If parliamentarians do agree to approve any draft bill, then a 45-member ad hoc committee will have to be set up to scrutinise the bills.

For the second reading, in which the amendment draft will be scrutinised article by article, a majority vote from both chambers or at least 369 “yeas” are required for each article.

To win an endorsement from Parliament in the third reading, it needs support from more than half of Parliament or 370 votes, which must include yeses from at least 84 senators and 20 per cent or 43 votes from opposition MPs.

But Parliament is only the first hurdle. A bill that involves charter amendment process, as well as changes to the chapters on general principles and the monarchy, must then undergo a national referendum.

However, if all motions are rejected, then the chance of removing the junta’s legacy in the next Parliament session will be zero. According to regulations, motions that share the same principles as those that have failed to pass cannot be reproposed in the same session. So, lawmakers will have to wait until Parliament reconvenes in May next year when they can submit a new draft. Critics say the decision to set up a committee is a ploy and will eventually result in the axing of proposed motions.

Critics also say the 250 senators, who were handpicked by the junta, will again play a decisive role in passing or rejecting the amendments after 229 of them voted in favour of setting up the study panel last week.

“It will be very difficult for the amendment to be approved [by Parliament]. Support from government and opposition MPs is not enough, it also needs a yes from 84 senators,” said Yuthaporn Issarachai, a political scientist at the Sukhothai Thammathirat Open University.

During the student-led rallies over the past two months, government MPs and some senators appeared to be sympathetic to calls for charter change, seeing it as a means to address widespread frustration. However, during the debate in the chamber last week, most senators voiced strong opposition to the amendment.

Leaders of the student-led movement see the decision to delay voting on the motions as a political betrayal and are threatening to step up their protests. Their next rally is scheduled for October 14. Student co-leader Parit “Penguin” Chiwarak called for a general strike on that day, which is also the anniversary of the 1973 student uprising.

Another protest leader, human-rights lawyer Arnon Nampa, said he was passing his clients on to fellow lawyers so he can “fight in full force” in “serious street protests” from October 14.

Arnon said the current Constitution was a legacy of military dictatorship and must be replaced with a more democratic one. He said the first priority was to get rid of the Senate, seen as a power base of the Prayut government.

Yuthaporn, meanwhile, thinks the upcoming student-led rally will garner support from other groups in society.

“I think there will be people who may not share the same ideology as the students but will attend the rally because they hope amendment [of the charter] will help solve economic problems,” the academic said.

However, whether the rally is successful in pushing parliamentarians to alter the charter will depend very much on how long it lasts, the analyst said.

Meanwhile, a recent public poll showed that the majority wants the supreme law to be amended even though they have never read it.

In a Super Poll survey last week, 85.3 per cent of respondents wanted the Constitution to be amended because that’s what others say is necessary, not because they had read it. Only 14.7 per cent said they had read every article of the charter.

The majority, or 95.6 per cent, indicated that some articles can be amended, but said chapters related to the monarchy should be left untouched. Just 4.4 per cent were okay with every article being altered.