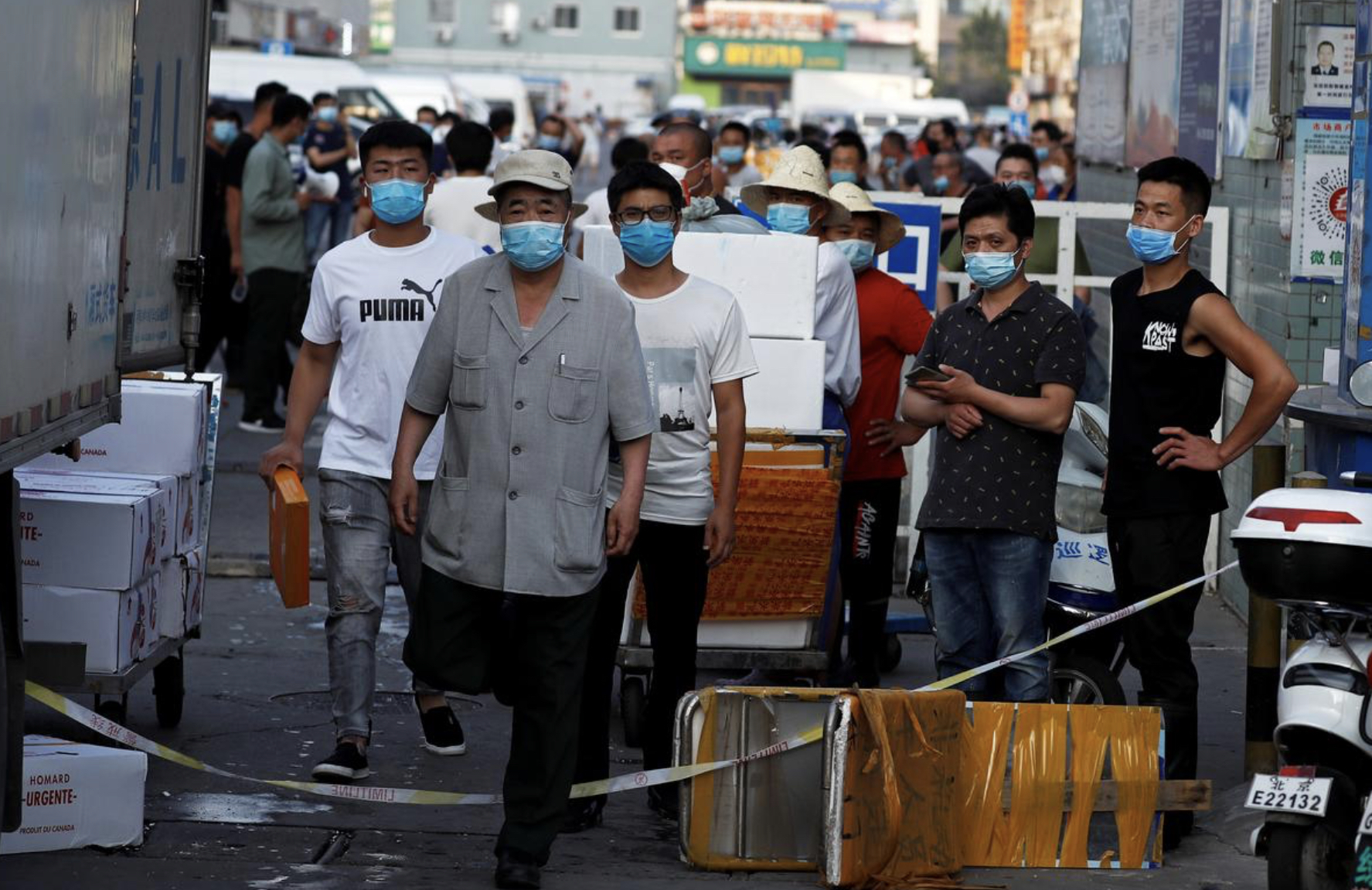 People are wearing face masks inside the Jingshen seafood market which has been closed for business after new coronavirus infections were detected, in Beijing, China, June 12, 2020. REUTERS/Thomas Peter

BEIJING (Reuters) – A district of Beijing was on a “wartime” footing and the capital banned tourism on Saturday after a cluster of novel coronavirus infections centred around a major wholesale market sparked fears of a new wave of COVID-19.

Concern is growing of a second wave of the pandemic, which has infected more than 7.66 million people worldwide and killed more than 420,000, even in many countries that seemed to have curbed its spread.

The virus was first reported at a seafood market in Wuhan, the capital of central China’s Hubei province, in December.

Chu Junwei, an official of Beijing’s southwestern Fengtai district, told a briefing on Saturday that the district was in “wartime emergency mode”.

Throat swabs from 45 people, out of 517 tested at the district’s Xinfadi wholesale market, had tested positive for the new coronavirus, though none of them showed symptoms of COVID-19, Chu said.

A city spokesman told the briefing that all six COVID-19 patients confirmed in Beijing on Friday had visited the Xinfadi market. The capital will suspend sports events and inter-provincial tourism effective immediately, he said.

One person at an agricultural market in the city’s northwestern Haidian district also tested positive for the coronavirus that causes COVID-19 without showing symptoms, Chu said.

As part of measures to curb the spread of the virus, Fengtai district said it had locked down 11 neighbourhoods in the vicinity of the market.

Authorities closed the Xinfadi market at 3 a.m. on Saturday (1900 GMT on Friday), after two men working at a meat research centre who had recently visited the market were reported on Friday to have been infected. It was not immediately clear how the men had been infected.

“Preliminary judgment suggests these cases may have come into contact with a contaminated environment in the market, or were infected after being in contact with infected people. We cannot rule out subsequent cases in the future,” said Pang Xinghuo, an official at the Beijing Center for Disease Control.

Beijing authorities had earlier halted beef and mutton trading at the Xinfadi market, alongside closures at other wholesale markets around the city.

Reflecting concerns over the risk of further spread of the virus, major supermarkets in Beijing removed salmon from their shelves overnight after the virus causing COVID-19 was discovered on chopping boards used for imported salmon at the market, the state-owned Beijing Youth Daily reported.

Beijing authorities said more than 10,000 people at the market will take nucleic acid tests to detect coronavirus infections. The city government also said it had dropped plans to reopen schools on Monday for students in grades one through three because of the new cases.

Health authorities visited the home of a Reuters reporter in Beijing’s Dongcheng district on Saturday to ask whether she had visited the Xinfadi market, which is 15 km (9 miles) away. They said the visit was part of patrols Dongcheng was conducting.

China reported 11 new COVID-19 cases and seven asymptomatic infections of the virus for Friday, the national health authority said on Saturday. All six locally transmitted cases were confirmed in Beijing.