Three top candidates for Bangkok Governor continued their campaigns in temples and at fresh markets today (Wednesday), ahead of the gubernatorial elections on May 22nd.

Chadchart began his day by paying respects to the abbot of Koh Suwannaram Temple and listened to people’s complaints, such as the 50 cats and dogs abandoned at the temple.

Later on, he and his team rallied in Ying Charoen Market, where he met with the vendors and visitors to the market and observed the waste management issues there.

Chadchart said that Ying Charoen Market is a good example of waste management. As local markets produce large amounts of waste and wastewater, he suggested that there should be measures in place for waste sorting in Bangkok’s markets, including a wastewater treatment system that is up to standard.

Yesterday, Chadchart also campaigned at Srinakharinwirot University and nearby markets in Watthana district, where he greeted the students and vendors there, as well as observing how the university manages its public spaces.

Meanwhile, Democrat candidate Suchatvee Suwansawat, campaigned at New Market in Min Buri district, where he met with the vendors, as well as announcing that he will implement measures to boost the local economy and to support vendors, so they can earn more income.

Suchatvee also vowed to improve the roads and pavements, to make it easier for pedestrians, and to improve city flooding within the district, if he gets elected.

Meanwhile, former appointed Bangkok governor Aswin Kwanmuang, campaigned at Saphan 2 and Tawanrung markets, in the Ladprao area, to meet the vendors and visitors, with many of them offering flowers in support.

Aswin announced that he will continue where he left off if he is elected. Many of the locals at Tawanrung market said that flooding remains an issue. Aswin said that he will fix the problem, adding that there are still problems with the drainage system, which have been a problem for more than 40 years. 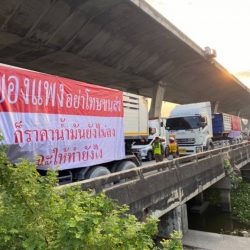 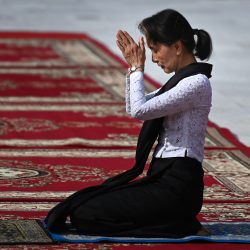