ASEAN-Japan ties – The next chapter

Japan has launched multi-pronged initiatives aimed at promoting ASEAN-Japan relations, taking it from a development to a co-creation partner, according to Japan’s Minister of Economy, Trade and Industry, Koichi Hagiuda.

He outlined Japan’s new vision of Asia in the post-pandemic world, with ASEAN as its core, in a webinar on January 10th, organised jointly by the Economic Research Institute for ASEAN and East Asia (ERIA) and the Foreign Policy Community of Indonesia (FPCI). He said there are three key words that symbolise the new cooperative relations between Japan and ASEAN—innovation, sustainability and cooperation. 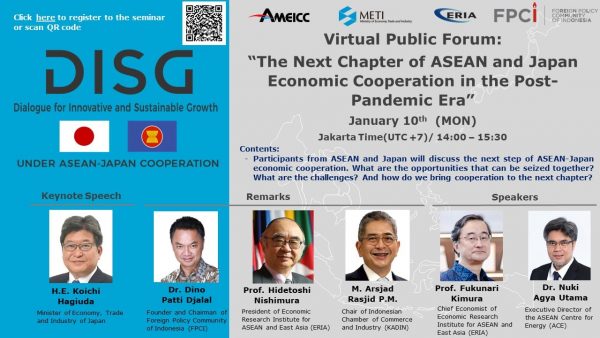 In his keynote speech, titled “The Next Chapter of ASEAN and Japan Economic Cooperation in the Post-Pandemic Era”, Hagiuda said that the traditional cooperation between Japan and ASEAN has changed significantly, from auto manufacture to more innovative production. These are the new trends on which Japan is now focusing.

Furthermore, he said that Japan and ASEAN could work together on the challenges posed by climate change, alleviating poverty and securing jobs, and resolve them.

Under the “Asia-Japan Investing for the Future Initiative” vision, ASEAN will be the main focus, to serve as a global supply chain hub and take the lead in resilient free trade with trust. He also added that another image of ASEAN is the Japan-ASEAN joint effort to create innovations that enhance sustainability and solve social issues in the region.

Two key priorities would be investing in all areas related to the supply chain, Hagiuda pointed out, with an emphasis on connectivity, digital innovation and human resources.

Japan will invest in strengthening the supply chain by transforming the grouping’s capability as an important hub in the global supply chain and increasing its attractiveness. “A stable and predictable ASEAN, attaching importance to free trade and multilateralism, offers high value in an era of uncertainty,” he said.

Another new move is to support ASEAN’s energy transition initiative in practical terms. Japan, in cooperation with ERIA, will work out an individual roadmap for each ASEAN member, taking into account its geographical conditions, economy and energy status. According to , this initiative will provide US$10 billion in financial support and capacity building for technology and projects, based on the roadmap for carbon neutrality.

Both “Asia-Japan Investing for the Future Initiatives” and “Asia Energy Transition Initiative” (AETI) represent Japan’s desire to invest in the future of the region. “Asia is becoming the growth centre of the world,” he stressed.

When Prime Minister Fumio Kishida was appointed last October, he said that he would further strengthen cooperation with ASEAN in all dimensions. During his tenure as foreign minister, under the leadership of former prime minister Shinzo Abe, he was a strong supporter of ASEAN centrality 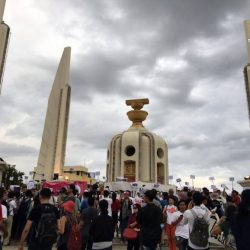