At first glance, a bunch of landscape paintings seem to blend in with the lush fields they are placed next to, but a closer look shows how they are in an unusual place, on a bumpy dirt road full of potholes.

Khon Kaen artist Kwanyuen Ketnoo displayed his paintings along the road in his home district of Si Chomphu in an effort to get the authorities to fix decrepit road and highlight road safety issues, as he was injured while riding his motorcycle along it about a month ago. Insisting that he was not speeding, the painter claimed he hurt his hand, forcing him to stop painting for some time.

The potholes on the road should be fixed immediately, to prevent loss of life, the artist said, in the hope that related state agencies will do something about it, because it is a major commuter route connecting communities with schools and other facilities.

It used to take 15 minutes to get into town using this road, but that time has doubled in the past two years because of the potholes, said Kwanyuen.

“I have been away for three years and I am back here in my hometown, hoping to help improve it. Then I see the problem with this road has remained unfixed for years. So, I feel it needs some communication, calling for some sustainable solution, so the lives of the people in the community can be better,” he said.

After the artist had put up some of his paintings on the road, Kwanyuen said some local agency tried to repair the potholes, but he said he would rather see a more permanent solution for this commuter route.

As creative as this initiative has been, this is not the first such attempt by Thais to attract local authorities’ attention to potholes. Last September, a video clip showing a woman rowing in one of the potholes in Nakhon Ratchasima province, also in the northeast, went viral. 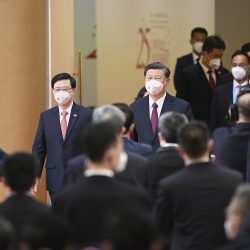