Anutin Charnvirakul is a pilot, and quite a few analysts believe he can fly high politically after the March 24 election.

Leading the Bhumjaithai Party, he has registered the biggest increase in popularity among all prime ministerial candidates in February, Super Poll has found. One possible reason is that he is perceived as a “neutral figure” in the highly divisive political climate. Another likely reason is that his political records have not been completely dragged through the usual muds, and Bhumjaithai has put clear-cut policies on its election posters, instead of making relatively vague promises to “end poverty” or “improve the economy.”

A major impasse between prime ministerial favourite Gen Prayut Chan-o-cha and his rivals could give Anutin the biggest political windfall of his life. Some analysts say he could become the next prime minister if Bhumjaithai does reasonably well in the election. This speculation has not been missed by foreign diplomats, who have named him a foremost guest at high-profile functions or interviews.

He was one of the cover boys of Forbes Thailand last year. That is a good business image in itself. Politically, Anutin is a former deputy minister of public health and leader of the Bhumjaithai Party, which has maintained links with northeastern “kingmaker” Newin Chidchob. Anutin also made a name for himself as a pilot who flies for charity causes.

His business credentials include presidency of Sino-Thai Engineering and Construction, one of Thailand’s forefront construction company. He has also been on the board of Thai Solar Energy Public Co. Ltd. The list of his impressive business activities has divided opinions about the man, with critics saying he is not that different from “successful” business persons who try their hands on politics hoping to expand their clouts and thus reinforce “domination” of Thailand.

Linkage with Newin can also be a double-edged sword. It can help Bhumjaithai in the Northeast, but it can affect his image as well when it comes to the last stage of the prime ministerial race.

Signalling what Anutin can expect when his political profile gets higher, he has been targeted for criticism when Prime Minister Prayut’s field trip in May to Buri Ram was warmly greeted by tens of thousands of locals. Anutin and Newin were accused of helping arrange the welcome and making it rosier than it should have been.

Anutin is married to former classmate Sasithorn and owns the Rancho Charnvee resort in Khao Yai. 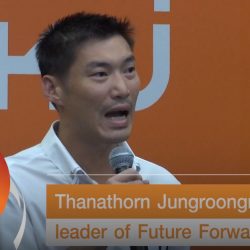