Abhisit Vejjajiva was once a young political heartthrob, but his tough choice now has nothing to do with girls. The Democrat Party leader and former prime minister will have to choose between two men, and his decision will go a long way toward determining the immediate future of Thailand.

He is leading his political party into the March 24 general election as its only PM candidate. He stands a good chance himself, but talks about Abhisit have revolved more around whether he would choose to back Prayut Chan-o-cha or the other political camp virtually associated with Thaksin Shinawatra.

After almost three decades in politics, Abhisit has become a seasoned politician, albeit facing a bigger and bigger dilemma that is threatening his leadership of the Democrat Party.

In 1992, a British-born, Oxford-educated 27-year-old Abhisit entered Thai politics for the first time after being elected the only Democrat MP in Bangkok. It was a time when the party’s popularity was very low and the capital was gripped by the so-called “Chamlong fever”. Former Bangkok governor Chamlong Srimuang’s Palang Dharma Party swept 32 of 35 House seats in Bangkok in the general election that year.

Abhisit’s interest in politics began long before his first election. It started during his school days and his party of choice was always the Democrat Party. During his school breaks, he often took part in the party’s activities. That brought him to a working group serving then-party leader Chuan Leekpai, who would become his mentor. When Chuan was prime minister, Abhisit served as PM’s Office Minister between 1997 and 2001.

In March 2005, Abhisit became the Democrat leader at the age of 40. He served as the country’s 27th prime minister from December 2008 to August 2011, at a time of global economic turmoil and rising domestic political tension.

His government faced major protests in April 2009 and again in April to May 2010. The military’s crackdowns on protesters, as well as unrest and riots, left some 90 people dead. In the vicinity of protest sites, many buildings were torched and malls looted in Bangkok, and there were arson attacks on provincial halls in the Northeast.

Abhisit was demonised by his political enemies who accused him of “ordering the murders of protesters”. One of the accusers,  red-shirt leader Jatuporn Prompan, was sentenced to a year in prison for defamation.

In 2013, Abhisit was charged with murder resulting from the 2010 crackdown but the Criminal Court a year later rejected the case on grounds that it was not a criminal case.

Abhisit served as opposition leader twice, during the tenure of Thaksin Shinawatra’s government from 2005 to 2008, and when Yingluck Shinawatra was prime minister from 2011 to 2013.

Under his leadership, the Democrats have never won a general election. Abhisit resigned as the party’s leader after the Democrats’ election defeat in 2011 but he was later re-elected. Last year, after completing his term, Abhisit was once again re-elected the Democrat party leader, beating off growing pro-military sentiment within the party.

The Democrat leader has expressed confidence his party would win at least 100 House seats in the upcoming election, offering to quit the party’s helm if the goal was not met.  He admitted in an interview that this could be his last chance to have a shot at the premiership.

Abhisit was born in Newcastle, England, on August 3, 1964, to Athasit and Sodsai Vejjajiva, who are both medical doctors. He attended Eton College and earned bachelor’s and master’s degrees from the University of Oxford. After returning to Thailand, he taught at Chulachomklao Royal Military Academy and Thammasat University’s Faculty of Economics.

He is married to Pimpen Sakuntabhai, his primary-school classmate who is a lecturer at Chulalongkorn University. They have two children — daughter Prang and son Pannasit, who has suffered from autism since birth. 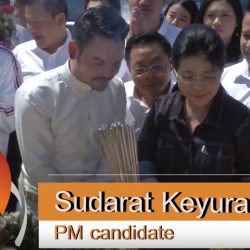 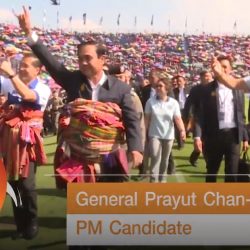