This week’s censure debate — the fourth and final under the current House of Representatives’ four-year term — is unlikely to bring down the government of Gen Prayut Chan-o-cha.

However, the prime minister and 10 other targeted Cabinet members are expected to suffer their worst damage as the opposition prepares an all-out attack ahead of the general election, due to be called next March at the latest.

The no-confidence debate is scheduled to start on Tuesday (July 19) and continue for four days before the MPs vote on Saturday.

In their censure motion, the opposition accuses the government of economic mismanagement, corruption, cronyism, violating human rights, and damaging democracy, among others.

The Constitution allows one no-confidence motion per parliamentary (not calendar) year. That is why there were two censure debates last year — in February and September.

Gen Prayut and his ministers managed to overcome the three previous no-confidence motions without much trouble.

The first censure motion against Prayut’s government was filed in January 2020, for a four-day debate from February 24 to 27.

It was the first no-confidence debate following five years of post-coup junta rule under Gen Prayut.

Gen Prayut was the main target and faced as many as 35 allegations, including the abolition of the 2007 Constitution, lacking knowledge and ability to run the country, and failing to solve the deep South insurgency.

However, the two main opposition parties fell into dispute after Pheu Thai used up all of the allocated debating time, sparking a walkout by Future Forward over a perceived betrayal.

Future Forward MPs had been planning an assault on Prawit, who had been implicated in several scandals since coming to power in the May 2014 military coup.

Most Future Forward MPs joined the post-debate vote, but Pheu Thai and other opposition MPs were absent. Pheu Thai leaders later explained that they boycotted the vote in protest of the House Speaker’s refusal to grant the opposition extra debate time.

The move resulted in an unusually low number of votes from the opposition camp, 49-55, against the coalition’s 269-277.

Many observers reckon the souring of ties between the two main opposition parties began at this censure debate.

PM Prayut and his nine Cabinet members were targeted in a four-day censure debate from February 16 to 19 last year, with voting on February 20.

Opposition MPs accused Prayut’s government of misusing its power to promote police officials and of establishing a cyber disinformation unit to attack government critics on social media. The PM was also charged with deepening divisions in society by deploying the monarchy as a shield against criticism of his government.

MP Rangsiman Rome from the opposition Move Forward Party told press at Parliament that he was blocked from grilling the government over claims that police promotions were linked to the Office of His Majesty’s Principal Private Secretary.

However, all 10 targeted ministers managed to achieve a comfortable majority in the post-debate vote, with a highest no-confidence vote of just 215.

The opposition allegations were accompanied by anti-government street protests outside Parliament and Royal Thai Police headquarters.

The last no-confidence debate, which targeted Prayut and five other Cabinet members, took place on August 31-September 3, before a vote on September 4.

Opposition MPs attacked the government’s perceived poor handling of the COVID-19 crisis during the third wave, which saw the worst casualties. PM Prayut was also accused of being “a power-crazed, arrogant person unsuited to leading the country”.

Prayut and the targeted ministers survived the no-confidence vote with a comfortable majority but that failed to alleviate the political pressure on their administration. Anti-government protesters returned to the streets in September and August.

Cracks also developed within the government, and the ruling coalition suffered more fallout than after the two previous censure debates.

The PM removed Thammanat, then secretary-general of the ruling Palang Pracharath Party, as his deputy agriculture minister amid reports that he had garnered no-confidence votes against Prayut in a bid to topple him.

Thammanat’s embarrassing removal led to a chain reaction that included the ouster of his faction from the ruling party followed by the withdrawal of his 16-MP Thai Economic Party from the government coalition just days before the upcoming censure debate. 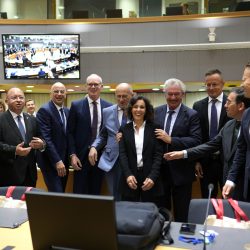 What the weakening baht means for Thailand’s economy