Many parts of nine provinces are still under water, with more than 61,000 people of over 25,000 households in 35 districts being affected, Disaster Prevention and Mitigation Office director general Chayapol Thitisak said this morning.

The nine provinces are Nakhon Phanom, Ubon Ratchathani, Bung Kan, Sakon Nakhon, Kalasin and Yasothon in the Northeast; Phetchaburi in the Central; and, Surat Thani and Ranong in the South.

In Ubon Ratchathani, 33 villages in 94 tambons of Khuang Nai district, affecting 1,758 people of 509 households in 33 villages.

In Sakon Nakhon, only one village in Nikhom Nam Un district is still flooded. The water level is increasing because of water discharged from the Nam Un dam.

In Phetchaburi, Kaeng Krachan and Thayang districts are still flooded, affecting 1,714 people in 27 villages. The water level is receding.

In Surat Thani, run-off from mountains have inundated parts of Phra Saeng district, affecting 450 people in 11 villages.  The floodwater is receding.

In Ranong, parts of Muang, La-Un and Kraburi districts are flooded, affecting 786 people in 13 villages. The water is receding. 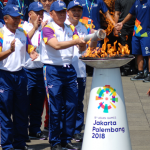