50 years on, Germany asks for forgiveness over 1972 Munich Games attacks Wreath are placed during a ceremony, commemorating the 50th anniversary of the attack on the Israeli team at the 1972 Munich Olympics in which eleven Israelis, a German policeman and five of the Palestinian gunmen died takes place near the Olympic village in Munich, Germany, September 5, 2022. REUTERS/Leonhard Foeger

Germany’s president asked for forgiveness on Monday for his country’s failure to protect Israeli athletes and team memberswho were murdered 50 years ago at the 1972 Munich Olympics.

“We cannot make right what happened,” Frank-Walter Steinmeier told a gathering including relatives of the dead and Israeli officials during commemorations at the airfield where a failed rescue attempt took place.

Eleven Israelis, a German policeman and five of the Palestinian gunmen died after a stand-off at the Olympic village and the nearby Fuerstenfeldbruck airfield.

Steinmeier said Germany should shoulder its share of responsibilities for the “catastrophic” failures to protect the athletes and for taking decades to compensate the victims’ families.

“I am ashamed. As head of state of this country and in the name of the Federal Republic of Germany I ask for forgiveness for insufficient protection of the athletes, for insufficient resolution of this matter,” Steinmeier said

“We also bear responsibility as hosts for not preventing what we should have prevented.”

The Games continued in 1972 after the attacks and the IOC took almost half a century to comply with families requests for an official act of remembrance at a Games.

It finally held a moment of silence and mentioned the Munich victims at last year’s Tokyo summer Olympics opening ceremony.

Ankie Spitzer, whose husband Andre, an Israeli fencing coach, was killed in the attacks, addressed him in her speech. “Please forgive me Andre that it took me so long,” she said.

“Although we are finally reaching our goals after 50 years at the end of the day you are still gone and nothing can change that.

“Everybody is asking me now if I feel closure. They don’t understand that there will never be closure. The hole in my heart will never, never heal,” Spitzer said.

Families had threatened to boycott the event following disagreements over the size of Germany’s compensation offer.

The dispute was resolved after Germany’s government and the Israeli families agreed on Friday on a package worth a total of 28 million euros ($27.77 million).

As flags across all state buildings in the Bavarian capital flew at half-mast, Israeli President Isaac Herzog and Steinmeier laid a wreath at the site.

“The decision to take responsibility for the failures surrounding and following the massacre, to allow for an objective and rigorous inquiry, and to compensate the victims’ families is part of that sanctification of the good and triumph over evil,” Herzog said.

The ceremony was attended by International Olympic Committee (IOC) chief Thomas Bach and other officials. 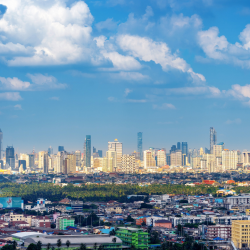