The 5th survivor of the 13 who have been trapped inside Tham Luang cave for more than two weeks was brought out and sent to Chiang Rai hospital this evening while another three are reportedly in the process of being transported  to the hospital.

Thai PBS reporters at Tham Luang cave reported that at about 5.05 pm, a police patrol car was seen leading an ambulance out of the cave to a helicopter which was on standby at Ban Chong village to evacuate survivors to the hospital.

The ambulance took about five minutes to reach the chopper which took off at about 5.15 pm and flew to Ban San Kong school for landing where a waiting ambulance picked up the unidentified “Wild Boars” Academy soccer team member and sent him to the hospital which is opposite the school.

The whole operation of evacuation from Tham Luang cave to the hospital took about 30 minutes which was faster than the evacuation on Sunday.   Meanwhile, the Thai PBS news teams also reported that three more survivors have been moved out of the cave and are on their way to the hospital.

Four survivors were taken out yesterday.  None of the survivors has been officially identified. 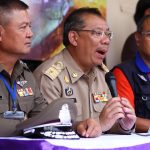