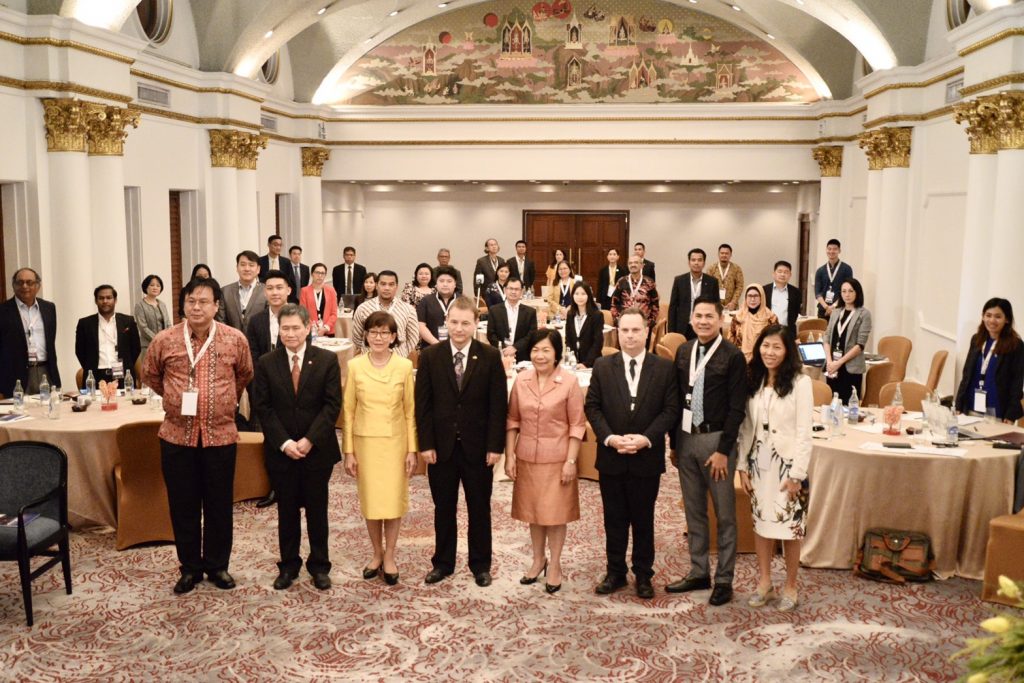 Your Excellency Dato Lim Jock Hoi, Secretary General of ASEAN,
Your Excellency Georg Schmidt, Ambassador of Germany to Thailand, with Germany being an ASEAN Development Partner,
Dr. Bandid Nijathaworn, Chairman of the Foundation for Public Policy and Good Governance,
Executives from the private sector, academia and the media,
Distinguished guests,
Ladies and Gentlemen:

It is my distinct privilege to join you at this 3rd ASEAN Media Forum, the first time being held in Thailand. I thank the Community Relations Division of the ASEAN Secretariat and other partners who help organize this important gathering.

I would like to forego the normal procedure and formality and cut to the core of the purpose of this session, namely to discuss the global challenges facing ASEAN and how we could or should respond to them. It is not my intention, however, to iterate all these challenges as I am amongst the most well-versed group in terms of regional and global affairs. Should I do that, I would be carrying coals to Newcastle.

Rather, I shall try to be as forthright as possible in highlighting some of the global issues whose solutions require global comprehension and global efforts to which ASEAN could be a contributing partner.

During the handover ceremony of the ASEAN Chairmanship in Singapore last year, H.E. General Prayut Chan-o-cha, Prime Minister of the Kingdom of Thailand announced that the leitmotif of ASEAN under Thailand’s chairmanship would be “Advancing Partnership for Sustainability.” These two concepts have been the core principles that shape the narrative of Thailand’s chairmanship of ASEAN in cognizance of the enormous weight on our regional community facing the serious challenges in the world.

Indeed, to borrow from Charles Dickens’ Tale of Two cities”, we all are living in the best of times and the worst of times. The meteoric rise of a new global power has set the inevitable stage for the rivalry with the ruling power. Such rivalry extends from security to finance to trade and even to technological innovation and modernization. The tectonic global strategic and alliance shift caused by the rapid rise of the rival power has led to increased aggression and nationalism, militarily, politically, economically and technologically. And here, history offers a sobering reminder.

In 12 out of 16 cases in which a rising power has confronted a ruling power, the result has been bloodshed. (Research conducted by the Harvard Belfer Center for Science and International Affairs.) The objective changes in relative power has always been dangerously accompanied by the perception of change among the rival leaders that led to strengthening alliances with other states in the hope of counterbalancing each other. However, entanglement runs both ways. In the case of Athens and Sparta as well as World War I, it was the “entanglements” on the part of “allies” that led to war where ruins ran both ways as well.

The defining question about the global order of our generation is whether the two rival powers can escape the Thucydides’s Trap, named after a Greek historian. We should also be mindful that a risk associated Thucydides’s Trap is that business-as-usual mentality can be expected to be tidy and folds neatly into the mold created for them. The assassination of an archduke in 1914 that initiated a cascade of reactions that produced outcomes that none of the rivals had chosen.

Many may argue that the Thucidides’ s Trap is not quite relevant in our modern time because it is inconsistent with the characteristics of the current era as the result of 1945 World War II. The evolution of international politics, the industrial revolution, deepened economic interdependence that diminished the relative utility of war as a tool for profit grabbing, the “mutual assured destruction (MAD”), are among the factors of the dearth of wars between great powers after World War II. These are people who fear more of the so-called Churchill Trap whereby the rival powers fall into a long-term confrontation reminiscent of that between the United States and the Soviet Union during the Cold War. They believe that such prolonged confrontation posted more risks because both powers would utilize all means other than world war for hegemony forcing the world to divide into two mutually exclusive camps that fight against each other for a long time to come. Countries will be forced to take side.

History has taught us that the logical response to the stress of structural shift is a pivot to a new strategy that includes rebalancing, engaging and should I say, hedging. Also, the best counterbalance to tension caused by negative aspects of rivalry is cooperation. And here is where a unified ASEAN and its centrality could play a role in steering the pivot from confrontation to “cooperative rivalry” between the two global powers. Partnership can run and benefit not only within our own ASEAN community but beyond.

Another factor that will enormously affect all of our lives is the 4th Industrial revolution led by the arrival of 5G and the rapid advancement of artificial intelligence or AI. Ours will soon be the world where the Internet of Things and AI could cause us to re-evaluate our humankind. The most worrisome part of this 4th Industrial Revolution is unlike the previous three such revolutions, the Fourth will not leave us much time to adjust. The digital seamless connectedness is capable of making many changes happen faster than the blink of an eye, both constructively and disastrously. And changes will come regardless of our readiness.

Cryptocurrencies are gaining momentum as medium of exchanges and other financial transactions as well as decentralized control of ledger technology as opposed to the central banking systems. Since the release of Bitcoin the first decentralized cryptocurrency in 2009, over 4000 “altcoins” have been created the last of which is Facebook’s Libra. Blockchain that serves as a public financial transaction database (distributed ledger for cryptocurrencies) will make possible “smart contracts” that could be partially or fully executed or enforced without human interaction. It can be employed in supply chain logistics and management and deployed in many industries we never realize it could such as the music industry, insurance and even voting.

And sooner than we think or would like is the presence and roles of AI in our lives. Robotic technology has become extremely sophisticated that “Sofia” the arguably most advanced humanoid robot now has her citizenship, whereas many humans do not.

In trade and commerce, we are seeing more rush to find a blue ocean while, there may or may not be many left. As the competition becomes more fierce, the aged-old tariffs and non-tariff barriers, and other kinds of trade extortion remain alive and well, some under a different name or branding, but nonetheless harmful to an open and inclusive international trading system.

Other global challenges, and I do not mean to put you through a garden variety of big words to lengthen the time of this remark but they do need to be heeded and resolved are sustainable development and climate change, clean water, democratization, the wealth gap, public health, gender equality, energy, food, freedom, transport, education, social and ethical decadence, good governance, and peace. These challenges are complicated and multi-dimensional in nature that require political will, determination, smart cooperation and constructive partnership to resolve and to make the solution sustainable.

For a long time, ASEAN was often dismissively called a paper tiger, criticized as purposeless gathering that would soon fade away as organically as it came to be. But such criticisms have been proven wrong. We have grown in stride. By recognizing our own individual strengths and weaknesses, ASEAN as a whole has been an impressive exercise of constructive restraints and mutual respect. Geopolitically, we have found that our region, situated right in the middle of the two vast and militarily and commercially important oceans, can play a useful balancing role as the major powers pivot. By maintaining our centrality and non-interference in each other’s internal affairs, by choosing to increase the size of the collective pie rather than using the beggar thy neighbor strategy when it comes to trade and development, ASEAN is a non-toxic regional grouping and thereby enhancing our role in the world stage. The tangible progresses include the just concluded ASEAN Outlook on the Indo-Pacific, that looks beyond the physical boundary of the Southeast Asian region, but into the Indo-pacific initiative, the adoption of functional activities focusing on four areas namely maritime cooperation, connectivity, sustainable development and other economic cooperation. There are three activities that the Prime Minister of Thailand as chair of ASEAN has invited the G20 countries to participate as part of the cooperative activities under the aegis of ASEAN Outlook on Indo-Pacific; they are maritime environment, financial inclusion and smart cities network. By the end of this year, ASEAN expects to reach the conclusion of RCEP (Regional Comprehensive Economic Partnership) by that will open a new horizon for ASEAN and beyond in trade and commerce. These are the two cases in point. As it is clear that transnational challenges are impossible to resolve without cooperation, Thailand has chosen to put the spotlight on partnership and cooperation, not only for the sake of responding to global challenges, but more importantly for our survivability, our growth and for the sustainability of our efforts and progress to promote peace and stability.

After the signing of the Declaration of American Independence in 1776, Benjamin Franklin arguably pleaded with the 13 American states that took part in the declaration that, “We must, indeed, all hang together or, most assuredly, we shall all hang separately.” With our “One Vision, One Identity” guiding principle, and with our determination to advance constructive partnership and cooperation, ASEAN is hanging together, perhaps not so neatly, more purposefully than ever before. This is the key to our response to the massive global challenges we all are facing. And to go back to Dickens—“it’s the best of times, it’s the worst of times, it’s the age of wisdom, the age of foolishness, the epoch of belief, the epoch of incredulity, it’s the season of Light, it’s the season of Darkness, it’s the spring of hope, it’s the winter of despair…” Together, ASEAN has learned to appreciate the morale of Aesop’s fable about a buddle of sticks. Together, we have come a long way since the Bangkok Declaration on August 8, 1967, and a long way forward we shall forge ahead to further reinforce our individual and collective strengths to increase our chance for peace and prosperity not only for the region, but for our rightful place on the world stage. 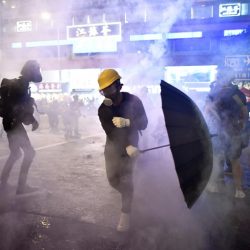