The Thai embassy in Jakarta, Indonesia, has been instructed to expedite its coordination with Indonesian authorities to help the 304 Thai people trapped at the camping site near Lake Rinjani in Lombok, Foreign Minister Don Pramudwinai said on Monday (July 30).

Mr Don said the number of Thai tourists registered as being stranded at the camping site near Lake Rinjani is 304. The embassy has confirmed all of them are safe.

Indonesian President Joko Widodo has ordered authorities concerned to dispatch helicopters to airlift those stranded in Lombok, he said.

Mount Rinjani National Park, a famous tourist destination in Lombok was hit by an earthquake with the magnitude of 6.4 on Sunday morning. At least 14 people were reported killed and 40 injured.

The foreign minister also revealed that no Thais were reported to have been affected by the flooding situation in Myanmar and the dam disaster in Laos.

As for the Lao dam disaster, the Thai government has continued to provide both financial support and rescue teams. Moreover, Lao, Thai and South Korean authorities have travelled to Attapeu province to examine the dam ridge of the Xe Pian-Xe Namnoy hydropower project, Mr Don added. 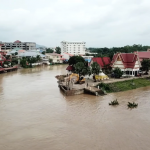