1,280 hectares of rice fields in Nakhon Ratchasima flooded and damaged

More than 1,280 hectares of rice fields in Thailand’s north-eastern province of Nakhon Ratchasima have been damaged after being under water for more than a week, and more rice farmland will be damaged if heavy rain continues.

The affected rice fields are scattered across 25 villages along the Mun River. They flooded after irrigation officials in Ubon Ratchathani opened five sluice gates, to discharge water through a dam into the Mun River, in preparation for heavy rain forecast from tomorrow (Monday) through Friday.

Troops from a barracks in Ubon Ratchathani province have set up a hotline service for villagers living along the Mun River, so they can seek help in case of flooding.

In Roi-et province, villagers in Ku Ka Sing sub-district of Kaset Wisai have formed a team of people to monitor an embankment of a reservoir, which partially collapsed last week, to make sure that it will not collapse again after recent repairs.

Meanwhile, the Royal Irrigation Department said it has reduced the volume of water being discharged through the Chao Phraya Dam in Chai Nat province to about 1,615m3/s since yesterday. 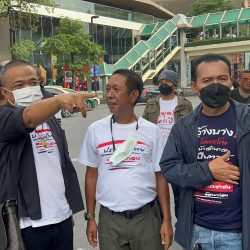