10 million vaccine doses to be distributed in Thailand in August

10 million doses of COVID-19 vaccines, mainly AstraZeneca and Sinovac, will be distributed across Thailand in August, with Bangkok receiving 1.25 million, according to the Public Health Ministry.

The vaccines also include the 1.5 million doses of Pfizer-BioNTech, received from the US government yesterday (Monday). Inoculation with the new batches are aimed at the remaining unvaccinated elderly population in Bangkok, its neighbouring provinces and other COVID-19 “Dark Red” provinces, among others.

750,000 doses of vaccine will be directly allocated to Bangkok’s 25 non-hospital vaccination sites each month, without going through the Bangkok Metropolitan Administration (BMA), following problems between government agencies concerning the amounts received, with an average of 1,000 doses received per day at each site.

500,000 doses will, however, be given to the BMA to manage, while the Bang Sue Grand Station vaccination site is receiving a separate quota for its 20,000 recipients per day, until the end of August.

Meanwhile, 415,040 doses of the Oxford-AstraZeneca vaccine, donated by the UK, will arrive in Thailand today (Tuesday) at around 9pm. They will be distributed across 29 “Dark Red” provinces.

About 18.2 million doses of vaccines have been administered nationwide to date, with almost 4 million people, or about 5.7% of the population, being fully vaccinated. 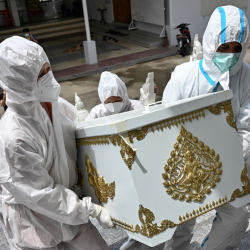